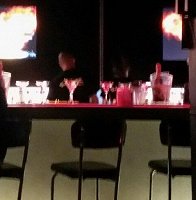 I look younger when I diet and take weight-loss medication and shave my beard. Thank you for your like and appreciate my artwork. Thank you for liking the music Mark @Mark_MERIX​​​​​​​ all the best.

Honestly this guitar loop doesn't mean anything in this song, except for my vocal that sings a totally different melody from this guitar. i just used the pretext of creating musical inspiration from the melody for my vocal i never had any connection with the guitar melody but my vocal i did that somehow fits perfectly into this insignificant guitar loop, i would say this guitar loop is nothing more is that an insignificant addition. this guitar loop is nothing more than a robot taking up space of a human worker in a car factory. For me the particular is only noticed and ceases to be particular to be something influenceable, when the listener learns to listen to the singer's art, sooner or later the change of ideas and meanings of being something particular ceases to exist to become a fad. So I always leave a gap in my vocals and style so that they don't stop being something private but also don't fall into fad and are discarded as an object of consumption. My Music would be Timeless I would say. But thanks for the like and the comments. Who knows, maybe someday I'll make another version of this song. I don't know. It will depend on my mood.