When using Magix Music Maker you might have noticed delay in sound, vocal does not syncronize etc. It is called Latency and how to solve this problem is explained in my Pdf e-book.

Hope it will help you. 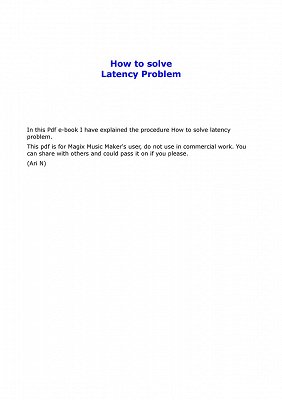 My second track is behind the first track when i listen to both, it looks like a latency problem yes; but the pdf above does not say anything about it;

"My second track is behind the first track when i listen to both, it looks like a latency problem yes; but the pdf above does not say anything about it."   I have the exact same issue. I have two versions of the same song. I want them both to play at the exact same time. I used the metrodome but I can't figure out how to  syc both objects. I figure there should be a click of a something to line-up the two objects (tracks/songs).

You left out adjusting the "Buffer" size to help with latency. Everything in your .Pdf is pretty much taken from the help section of "Music Maker MX".

The information helped to solve latency problems when recording.

I also have had a speed problem after recording track 1 in DAT modus. Trying to record track 2, the playback from track 1 was faster. Making some tests, I’ve found out that if I record the 2nd track in CD-modus the playback speed of track1 went back to normal. Recording in CD-modus is a bit noisier but hardly recognizable by adding more tracks to the arrangement.

Hello there, I have Music maker MX but my problem is that I cannot hear a playback while I'm recording. I checked the "Playback while recording" box, but still can't hear playback. I am using Realtek HD sound driver. Tried to install ASIO driver but it did not work either. I can playback  what I have recorded but can't hear during recording. Your advices is highly appreciated. Thanks....

If I select ASIO driver as recommended, I no longer hear any audio when I press keys.  The latency is driving me mad - I should have known better than to buy another Magix product as every single one seems to require endless fixes.

I'm pretty new to SAMPLITUDE Studio Pgm. and have latency problem using my Nectar MIDI-controller - how to make correct adjustments?

Many thanks for any help...!

You are using very old post therefore, you may not get answer, better ask the same question again in your new post.

Unfortunately this forum has changed a lot. Good luck.

PS. I found a new link and posting here use that may be you get some help.