This Tutorial was originally written in German for this forum, but after a user request I decided to translate it into English.

Thanks go to keith-clatworthy ​​​​​​​ for the pictures and with cleaning up the English translation.

Concept:
Since September 2017 MAGIX has introduced a new concept for Music Maker.
In earlier versions MAGIX gave you a specific set of soundpools, instruments, functions and presets.

Since September 2017 this is no longer the case.
You can now decide which specific functions, presets, soundpools or instruments you want as there are a number of coupons included with each version that allows you to chose these from the store. The amount of coupons included varies, depending on which version you chose to purchase.

There is also a way to unlock the functions, instruments and presets you may have obtained with earlier versions of Music Maker by using the serial numbers they were supplied with.

So if you don’t care about the new instruments or soundpools, this is a cost effective way to unlock the functions, presets and instruments that you previously purchased at no additional cost.

If you only want one or two functions which you don’t already own, then you can unlock them for only 9,99€ each by purchasing them from the store (incorporated in Music Maker). So if you don’t care about the presets, instruments or soundpools included with the Plus and Premium versions then this is a cheaper way to proceed, however, if you want a lot of features then the Plus and Premium versions represent much more cost effective way to go.

If you want a Premium function in the Plus version then this is not a problem, just add it via the store, or, for example, the Plus version + two additional functions you can now have this, rather than spending 60€ on the more expensive Premium version. The choice is now yours.

So how many coupons are for free included in the Plus, Premium or Special Edition?

*The number of functions, presets, instruments may be expanded in the future.

How can I unlock functions, presets, instruments and soundpools?

First, you have to activate your edition:
Go into the in-app-store and click on the gearwheel in the top right corner.
There chose ACTIVATE EDITION. 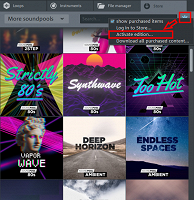 A new window will appear. At the top, you can enter your serial number from the newest music maker (plus, premium, 80s, trap, edm or hip hop beat producer edition)
At the bottom, you can enter the serial number from an older version (MX - 2017) in different versions (standard, plus, live, premium or production suite)
If you already have older music maker versions installed then they will already be displayed on the screen.
Press ACTIVATE to unlock your edition. 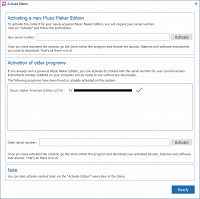 A new window will appear which will show you that you have successfully unlocked the version. (On the picture it shows the hip-hop beat producer edition, with a modified image by me for the the english version of the tutorial.

Repeat that until you have unlocked every version you want.

How can I now unlock the functions, presets, instruments and soundpools for free?

Open the in-app-store and choose the category you want. (In my example we will choose from  ‘Instruments’ category. To do this, in the store select ‘More instruments’ from the drop-down menu.

At the bottom, you can see how many coupons you have left. I still have the option to choose 12 instruments for free.
If you have unlocked earlier version of Music Maker then the instruments from that version are already unlocked. You only have to download them.

Another window will appear. You can see that the instrument would normally cost 29,99€, but the program knows that I have 12 instrument coupons left and so it automatically displays the cost to be 0€. 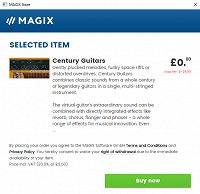 To buy the instrument you now only have to click on BUY NOW.
You have now successfully unlocked an item from the store for free. You can now download and install it.

I am now left with another 11 instruments that I can choose for free.

To sum up:
1. Choose your category
2 Choose your item
3 Press on BUY NOW
4. Check if the coupon was successfully added (so that the item is for free)
5. Download and install it.

I hope you now understand the process better.
If there are any questions then please feel free to ask.

Music Maker premium 2019...Vita VST plug in can not be loaded...I am getting this message.Tried to reinstall but it's gone.Not to be found even in my older version,Music Maker 2016.Anybody to rescue?