I am not sure if this is unique to my installation of MEP2013, 2014 Premium but the Alpha masks that are installed with the program do not appear in the Mediapool. All I can see are the HD and SD folders with nothing inside visible, unless I navigate to them via Windows explorer where they display OK. They function correctly via the Add Effect Mask function in a specific effect, but it is nice to see them displayed so I can drag and drop one if I am designing an effect or something.

Anyone found the same thing as I am seeing and developed a way to make them display in the effects menu or folder tree view in the import tab?

Same here. It's always puzzled me. There are a few other empty ones too, I recall; I'll check tomorrow.

To get round this issueI I created a Resources folder which holds all my Masks, Alpha images, music, video loops etc as shown below and copied the masks from Magix into this folder. 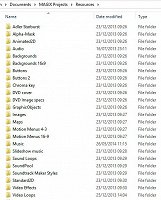 There are a few other empty ones too, I recall; I'll check tomorrow.

I did so and here's the list of other empty folders I found in MEP 2014 Premium:

Thanks for looking at that.

I initially tried the Rt. Click>Create Folder Link to the original location but the same empty folder resulted.

I then tried the same thing after copying the masks into a new folder as John has done and now they are all available as a new link from the Import Tab, non folder tree view, for easy access.

Terry - I see the same thing as you on those other folders so I guess you could do the same as above.

Kind of strange though!

I have purchased 2015 Premium, just to get the RG and NB plugins. I still have everything set up as per the initial installation and I'm going through making screen shots of the various media pool folders - the ones with icons, not just dialogue boxes. Next I'll populate my spreadsheet with the names of the effects files, etc., to know what came with the program.

That said, I took a look at the folders mentioned by all of you and confirm the same in MEP2014 Plus. I had noticed before that the masks were not avalable under Import and made a copy under Documents/Magix and added in my own subfolders and additional files so that I could access them from the Import tab. I didn't go quite as far as John, but similar. I have a lot of files under "C:\Users\Public\Documents\MAGIX\Common" including sounds, music, stock photos, videos, effects, etc. purchased or obtained from Magix and Catooh. I added folders under Import to navigate directly to them.

I took a quick look at 2015 Premium and it has the same pattern. HD and SD show up in the import tab but with no details for masks.

I went through Terry's list, looking at Windows Explorer (WE) at the same time as the Import tab and I noticed a few strange things.

Here are some of the results.

First observation is that the tree disappears from the left column in the Media Pool when I get to ".......\VideoEffects" and does not come back until I go back up to what they call "Workspace" which shows my computer drives.

FOLDER NAMES DIFFERENT IN IMPORT TAB AND WE

The folder names in MEP and WE are not always the same. See next 2 screen shots. 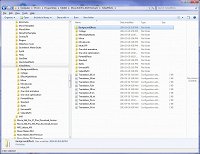 How do folders show up that are not in Windows Explorer?

FOLDERS NOT THE SAME

In WE, I do not see a folder for Collages directly under Styles, but Schiebepuzzle is listed. Collages comes under Components and is also at a higher level directly under "..\VideoEffects" in WE

Many of the folder names are not the same in the Media Pool as in WE.

Note the list in the image and compare it to the WE folders below: 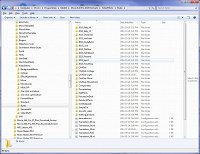 Note also that clicking on "Style effects" in the Media pools produces "...\Styles" in the path indicator at the top of the screen.

Somehow MEP detects these things when one navigates to the program folders for the program that is open, i.e. MEP2015 or MEP2014, and does something to the Import file paths, probably to protect files and folders from inadverent changes or misuse, or something else.

The reason for the mis-match of names is down to exactly the same good intention of MAGIX to display meaningful names, using a translation.ini fie, as I described in my recent Collages guide.

Unfortunately, as you've discovered, it sometimes increases rather than reduces confusion 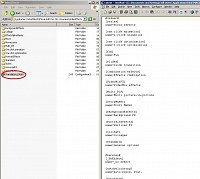 Or for better quality: https://dl.dropboxusercontent.com/u/4019461/MEP-Folder-Names.jpg

Right, then that means that the Media pool explorer detects the translation.ini file when one navigates to the folder, which I find strange. I can understand this happening under the other tabs, Fades, Titles and Effects, but I would have thought that they Import tab would ignore the translation files. As I pointed out, it ignores them when you navigate to the same folders in a previous version using a later version of MEP.

I have to look back, but I ran across a problem with the names, both with the folder names and those in the ini files and I couldn't figure out how and where to copy files from previous version to the new version. The structure seemed to be different. I will let you know if I find what I was trying to do.

It is indeed all rather confusing! I wouldn't like to estimate how much time I've spent poking around in the obscure corners of MEP trying to work out what's going on. It's one of the reasons I'm reluctant to switch to MEP 2015, now that I have things under reasonable control in 2014 - albeit heavily tweaked, customised and sprinkled with macros.

So I'm afraid that I won't be much help to you with 2015 specific issues.