I captured video from a 8mm camcorder that creates AVI files. When I play them in Windows the audio is clear. When I import those AVI files into Movie Edit Pro Premium 2017, the audio has a buzzing sound over the whole track. I changed the Audio Sample Rate to be the same as the AVI file, but that did not help. Any ideas what is going on? Can you try separating the audio from the video track and look at the waveform? Does is have repetitive spikes in time with the clicks? If it has spikes in the waveform then it's in the audio file. if it doesn't then there is a problem with MEP playing the file. Is the camcorder producing surround sound files? There appears to be something on the audio track. See the attached picture. 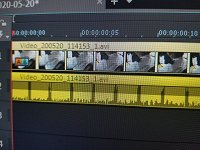 I just imported the same clip into Adobe Premier Elements and the audio plays clear and when rendered, produces clear audio. Any idea what is up with MEPP?

Hi and welcome to the forum.

What device and software did you use for this?

The issue you are having looks like and audio codec/bitrate/samplerate issue.

Can you analyse the video clip with MediaInfo and post the results from the Text view - - MediaInfo will tell us what you are dealing with.

I have no audio troubles when using VLC, Adobe Premier Elements, or Shotcut.

In older versions of MEP I've occasionally had audio problems with imported AVIs.

If memory serves me well, I had some success with "curing" the audio noise by going to File-Settings-Program-Import/Export and under Import Formats unchecking AVI Import Module.

I assume this then lets MEP use the Windows AVI system although I'm quite prepared to be shot down in flames over that.

Unchecking this import module must be done before importing the AVI and also must be done every time you open MEP as the setting is not saved.

As I said earlier "if memory serves" and I'm probing the recesses of ancient mind. It may not work with "modern" versions of MEP but there's nothing to lose by trying (I don't think - again I'm prepared to be shot down).

Just out of curiosity, did you trying to capture direct into MEP with Firewire. I used to be able to with my old SONY DV camera.

Or maybe capture the audio to MP3 or similar. Or just use something, such as free Avidemux, to convert the audio of what you already have to a format MEP likes?

From the MediaInfo data various things strike me.

First, that audio seems to have two streams; this is known to give MEP problems.

Second, and perhaps more pertinent here, the audio sampling rate is 32kHz (MEP will almost certainly be expecting 48kHz) and the bit depth of 12 bits is, in my experience, "unusual". I would try, as a first step, using a video file convertor like Handbrake or the paid-for (but very useful) MovAvi Convertor to change the audio to 48kHz and 16 bit.

I would also like to echo the question/suggestion in @me_again's post, about capturing direct into MEP with Firewire.

Thanks for the MediaInfo analysis.

The issue is the FireWire Application that captured the AVI has created a Type 2 AVI file, ie it has 2 audio streams, MEP can only use one stream.

If that does not work use DVDate to convert the AVI to a Type 1 (single audio stream) format - make a backup copy of the AVI first, and import the converted file into MEP.

Thank you all, I appreciate the input. I need to use the intermediate FireWire App because I am passing video from a 8mm camcorder through my FireWire DV Camcorder to my PC. If I try to use MEP directly, it controls my DV Camcorder (i.e. turns it to video mode) so I cannot pass video through.

I did not see the "Switch current audio track" option. As mentioned above, I have a couple of options that work, so I am good now. Thank you for your support.