An exported AVI file is 5x the size of an imported (from a Sony Digital8 camcorder) AVI file. Why? An exported DV-AVI file is about he same as the imported file, but it is "jerky". Looking at that, frame by frame it goes 3-4 frames with a change in movement, but then no movement for the next frame - so on and so on. These files are a straight import then export. There have been no effects used or any playing around with codecs, etc. I don't expect same file sizes, but 5X!! All are standard NTSC 740x280 4:3 29.97fps. Simply "defaults" in MVP. Any ideas appreciated.

I assume you are exporting your files as "Uncompressed AVI"? If so, since your file imported from your camera will almost certainly be in DV-AVI format, itself a "compressed" format, that size difference is very much what one might expect.

I have to ask: what is the purpose of your exports? Clearly, you are not burning DVDs, since they require MPEG-2 format, nor are you exporting to a more "standard" consumer format like one of the varieties of mp4. What are you trying to achieve by these exports?

You comment about any exported DV-AVI being "jerky" when compared with the imported file suggests you are perhaps making some setting in the Export screen which is creating this problem. What are the exact settings you are choosing on the Export screen?

The purpose of the exports are two fold. The first is to have an AVI, with effects, "archive" file instead of an MPEG - a quality thing. Second is using that file to create a DVD using TMPGEnc. I realize the MPEG-2 for DVD, but I assume passing an MPEG-2 to TMPGEnc is worse than passing an MPEG-2.

My choices for DV-AVI (Ctrl+Alt+D) settings in Magix Video Pro X are: Standard NTSC, 720x480, 29.97 grayed out, Ratio set to 4:3, Chroma grayed out, Interlace grayed out, Media Video+Audio, Standard (2D), Bits per color 8 grayed out, Format description Advanced set to NTSC, Render changed... checked, Output after... unchecked, Write audio date checked. Apply anti-interlace filter is unchecked, but that setting didn't do anything (as I remember, but should check that again).

Thanks for the additional information.

I've never tested the "quality" of an Uncompressed AVI against that of an MPEG(-2) but my guess is that actual visible differences will be small but I also think most computers/video editing packages would struggle to smoothly play an uncompressed AVI because of the needed data throughput.

However, ignoring for the moment your archive wish, I have to ask: if you are outputting to DVD why are you not using the built-in DVD burner in VPX? Why create the MPEG-2 from within VPX and then use another software to actually create the disc? Personally, I only ever burn a Disc Image in order to avoid creating "coasters". The resulting .iso file can be played in any iso-viewer software to check its quality. I suspect TPMGEnc is likely to be performing at least some degree of further compression to your files. Yes, the VPX-supplied burning software is not perfect, e.g. menu creation is somewhat "minimal", but software like Vegas DVD Architect allows for the creation of much "better" menus and interface.

On the question of DV-AVI Export, I would not even consider using that! Yes, the "options" in VPX are minimal but, because your imported files are almost certainly DV-AVI (can you confirm their format, please?) to re-encode as the same format is to apply even more compression! I know the Export screen>Advanced does talk of "Smart render options" (i.e. the original will be copied exactly "as is") but this cannot and does not apply if you have made any change to your original files, e.g. applied an edit, transition, effect, etc., of any kind. In that situation the file must be re-rendered = further compression.

In summary, your wish to maintain full quality in your "archive" version is extremely commendable but the practicalities of using Uncompressed AVI to me, outweigh the advantages of the format by some considerable margin! If your editing software struggles to play such files you will have considerable difficulty should you ever wish to carry out any additional editing in the future. And then, there's the problem of file size.....!!

However, I know that @AAProds (Al) does use such files, though with a specific codec, so I have tagged him here so that he can, hopefully, offer advice based on his experience.

Why use a third party program to create the DVD? VPX can do this without the need for re-encoding the source video twice - to AVI and then back to MPG as VOB files which are a sub set of the MPG standard.

DV-AVI is a very restricted and compressed format with very limited settings that can be adjusted.

For DVD you should be selecting Export video as MPEG and selecting the appropriated DVD format - see image below. It is possible adjust the settings, however do be aware that the default settings are already optimised and increasing parameters such as the Average and Maximum bitrates too high can result in unplayable discs. 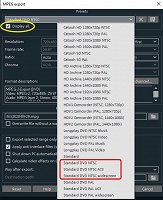 ...However, I know that @AAProds (Al) does use such files, though with a specific codec, so I have tagged him here so that he can, hopefully, offer advice based on his experience...

I do and I love them (AVIs)! Let me explain though, because AVIs are not the same.

DV-AVI, as John has said, is a fairly compressed format and the NTSC version is particularly bad at keeping colour information, to the point where the NTSC experts hate it. DV-AVI runs at around 13gb per hour. Ask Lordsmurf what he thinks of NTSC DV-AVI!

The other AVIs are the “uncompressed” and “lossless” varieties:

-"Uncompressed" AVI file sizes are huge: in the order of 100gb per hour. I don't have my MEP computer with me, but the "uncompressed" AVI option in the AVI export dialogue is normally the top one (and may well be the only one “out of the box”).

-"Lossless" AVIs, such as Lagarith and HUFFYUV, are "compressed" to a certain degree but allegedly are lossless, so you can edit them and re-export in that format and retain every bit of information in each frame. On the other hand, MPEG and MP4 are heavily compressed, "lossy" formats that are known as final delivery formats: for the end product and not to be re-edited and therefore re-rendered, as quality will be lost. Lagarith is about 40gb per hour and HUUYUV is around 30gb per hour; quite an improvement over uncompressed for just a very very slight drop in quality.

I suspect that you probably chose “uncompressed” when you did your “AVI” export because that was the only codec listed, and that resulted in those huge files.

Use of these files for editing/playback? My experience is been that the degree of compression determines the difficulty of playback/editing, not the data rate. A highly compressed MP4 is much harder to edit than an uncompressed AVI. That's why DV-AVI was so easy to edit; it is "relatively" lightly compressed. Certainly, Lagarith (my AVI codec of choice) is very easy to edit, even on my crummy old machine. Scrubbing the timeline is instant. Playback through edited portions is a bit jerky, but quite liveable.

Now onto the issues at hand. @srpohl is right to archive in AVI for any edited files, just do not use DV-AVI (you can, of course, keep your pristine, original DV-AVI files, as they have not been rendered, just “copied” from your camera). Unless you are happy with uncompressed file sizes, you will need to install on your computer one of the “lossless” codecs so that it will be available to VPX so you can export in that format. The Lagarith installer is available on the net, and I simply ran the exe file to install it and it appeared in the AVI export codec list. If you are editing your DV-AVIs and then want to archive them, export your timeline to Lagarith or HUFFYUV. You then have files that are readable by any video editor and can be re-edited without loss later on if you desire..

For your DVD, this is an interesting one. If you want to use TMPGenc, then I would suggest simply giving it the lossless AVIs (Lagarith or HUFF) you made for archiving and let TMPGenc render them into MPEG (or “VOB” on the disk, as John rightly points out). I add that I have no experience at all with TMPGenc so you should check the preferred input formats for it.

If however you are going to use VPX (which does a great job of titles/menus) then, after you have edited your movie/s and set chapter marks if desired, simply go to the Burn screen and burn the DVD from there. As Jeff suggested, I always “burn to ISO” first (ie not to a physical DVD) to check the final result to make sure the titles/menus run correctly. I almost never get it right the first time! You can use VLC Player to “play” your ISO and it will appear just like a DVD would appear on your TV; you use the mouse to click on menu items.

I haven’t tied it for a while, but I suspect that VPX (I’m an MEP man, myself) will re-render any MPEG file you put into a movie for a DVD, so you will be inducing a generation loss (admittedly, probably not noticeable if it’s only the second generation) when MEP re-renders it during the DVD creation. Therefore I recommend you create your DVD from the timeline and not render as MPEG first.

TMPGenc, (and my favourite MPEG program, VideoRedo) on the other hand will probably smart-render any MPEGs you throw at it. It just depends on your workflow whether you get VPX to create MPEGs to give to TMPEGnec or give TMPGenc the AVIs. If you gave TMPEGenc your edited AVIs, you’d save rendering time (by not having to render to MPEG), but then I suppose TMPGenc would need to render them to MPEG for the DVD anyway.

One last thing to consider: watching these files on your TV. To be honest, I haven’t watched an actual DVD in yonks. All my movies/videos are MP4s or MPEGs, which are readable by my smart TV. AVIs are not (although some media player boxes can probably read them). You may therefore need to re-render your movies into MP4 (best space-saver) or MPEG so you can play them directly on your TV.

I had better have a Bex and a lie down after that missive! I hope that helps, and please ask if I’ve confused anyone.

Thank you all for great information, I appreciate it. I solved the issue with what I wanted to do by getting Vegas Pro 18. Another learning curve to go thru, but I think it will be well worth it. Thanks again.