We want to know your opinion! How do you like the new version? What are the features you are missing? Which feature are you thrilled about? As always, be friendly and constructive in your criticism.

Let the feedback round begin! 🎉

I've found that my last save I do isn't always saved while the one prior is if I make another alteration before saving. Also, I'm not sure how you can rearrange tracks to different positions in the track order. Do you just drag down or up to a new track? I would also like to know if there is a way to drag an event to another track without losing its position in the timeline. Thank you for any responses. I am trying, bit by bit to make my way through the manual but it's taking time. On the whole I think the program is brilliant but some things elude me and don't seem to work the way I expect them to, such as keyframes on the timeline. Sometimes things zoom off in directions I didn't expect or suddenly repeat themselves half way through rather than end in the position I want at the end of the specified time. I'm sure it's me but I'm flumuxed at what I'm getting wrong.

See item 3 in this comment. - the Dropdown referenced is indicated in the image below 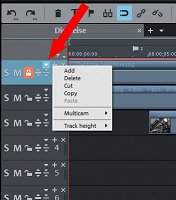 See item 3 in this comment. - the Dropdown referenced is indicated in the image below

So there is no way to drag a clip up or down to the same point in the time line? I've been using a magnified view with the curser to one side to line up to. Also did someone mentioned exporting audio to the external editor and then on importing back that the audio had not changed? I've not had this problem but I notice there seems to be more than one place you can tell it to re-import the clip back. I am not using the drop down menus to do this but using the export button.

Yes there is - hold down the Shift key while dragging the object from one track to another - this prevents the object moving sideways.

. . . . exporting audio to the external editor and then on importing back that the audio had not changed . . . .

This looks like a bug when export to certain Magix sound cleaning programs such as Video Sound Cleaning Lab, if you do not have any of these programs installed, editing externaly will open Music Editor 3 which has no issues in returning the the modified audio.

This is a different thing to the external editing mentioned above which is called from within MEP.

Please note this topic is about feedback of the new patch, for questions like these please create a new post as they are general operation questions not specific to the latest patch.

Yes there is - hold down the Shift key while dragging the object from one track to another - this prevents the object moving sideways.

. . . . exporting audio to the external editor and then on importing back that the audio had not changed . . . .

This looks like a bug when export to certain Magix sound cleaning programs such as Video Sound Cleaning Lab, if you do not have any of these programs installed, editing externaly will open Music Editor 3 which has no issues in returning the the modified audio.

Sorry. When more experienced users such as yourselves use abbreviations for some programs or features it is hard for lesser mortals such as I to keep up. I wasn't aware of more than the editors being supplied of being capable of being used. I'm assuming the one you do mention is not then the one that opens as a mainly grey box with pre-set filters. Because I'm not having problems with that one either.

This is a different thing to the external editing mentioned above which is called from within MEP.

Please note this topic is about feedback of the new patch, for questions like these please create a new post as they are general operation questions not specific to the latest patch.

Again, apologies as I wasn't aware I was off topic. I promise to try to keep up with the component abbreviations in future.

Re keyframes - this is always a good subject. Please open a new thread about keyframes and we will reply to it. It helps others when searching for solutions to have these things in their own threads.

I tried to upgrade and when I reached a comment that wanted me to stop the "magix Network Sunc" I had to idea how to do this so I said to ignor. Another comment came later to stop some process and I did the same thing. at the the end of the installation it said it simply failed. Went back to my 2018 version and it would not work. Undoubtedly the installation process had deleted something that was needed. I immediately did a restore to about 4 days earlier hoping that my old version would be ok. It will not work and now if I do a reinstall I get to the same command " stop magix network sync". Don't know what to do. I put in a request for help but no help yet. Any one know what to do?

In the popup window right click the Network Sync icon shown below and select Exit (Beenden if it is in German).

Magix has changed the text of the New Title feature to simply:

"Entertainment from start to finish. Make movies that impress right from the start — with all-new title animations. And keep the suspense turned up all the way to the end with an extensive selection of effects."

Sorry, but new title templates that have to be purchased from the store do not qualify as a new feature. I would like a very good explanation from Magix.

Looks like it is gone completely from the GB site.

I am rather new to all this, but like the idea of a target track, being able to delete a track and move tracks around.

Hi Tom and welcome to the community,

It's nice to see another Canadian here.

Yes, the target track and moving tracks around is a nice new feature. The target track takes a bit of getting used to. One has to remember to click on the track header and set the cursor. I usually just drag and drop from the Media Pool. I hope that they get this feature into VPX soon.

I like it (mostly) so far, however a couple of initial niggles:

1) The most important one (for me at least) is using "Rotation". Using the previous version, the Straighten Horizon slider would automatically crop the picture so that the sides were vertical - some changes to the aspect were available using "Section" but the sides always remained vertical.

The current version always shows the sides at whatever angle Straighten Horizon is set at.

2) This is more of a niggle really. In the previous version the icon buttons under Effects always stayed where they were i.e. using a button at the bottom of the scrolling bit and applying the effect, that button was still showing.

In the new version after applying the effect at the bottom of the scroller the button move to the top again meaning I have to scroll down to the bottom (or wherever) again. Irritating but not life threatening.

Edit - Has anyone else noticed that when a video is being exported, the taskbar icon (or whatever it's called) is always solid green? In the previous version it slowly turned green as the encoding progressed.

I use this when I'm doing other computer stuff as MEP does it's stuff. A progressive green was easy to see without staring at it, now I have to look for the % figure.

Strangely, when I export (the new feature) just a chapter, the bar is progressive green.

2. Can you give something more specific, like which effect(s) and maybe a screen shot? I can't reproduce this. I tried with the left-hand Effects column as both a list and icons and when I apply the effect, the icons/list in the left-hand column don't move.

3. Confirmed. I noticed that it went to full green very quickly, whereas with MEP2018, it went slowly. I tested using the same project.

If I then need to change the Magnifying glass effect before moving on to a different section of video then I have to scroll back down. Like I said, it's a niggle more than a problem but it never happened in any other version I've had.

Point 2: Still can't reproduce this on my Surface Pro 4. Maybe John EB can try. After pressing on Apply effect, I get the effect, but nothing happens in the left column. The NB Magnify icon stays put. I changed some parameters, still no problem, except that the NB Magnify icon makes me look fatter than I think I am.

Aah, maybe it's my system. Mind you I can't see why. When I get the time I'll try and video copy the screen as it happens.

Item 1 - confirmed, however under 2 specific conditions, otherwise no issue:

Item 2 - this used to happen with me in patch .204, however, no more the issue for me is I have a 'new' computer - replaced m/b, Processor and RAM and then updated to patch .205 as well so I cannot say which fixed it.

John EB - Agree with Point 2 section 1 but with regards to section 2, no matter how much I crop it down using section the angled sides still show. Could be  Nvidia vs Intel onboard again? Got it. You used the old interface for NB. Did you try the OFX interface? The OFX effects are a little further down, so you should see a second effect with the same name, but prefaced by NewBlue V3 or V4 (for the magnifying glass).

The old interface will likely disappear in the future, still, I would put this down as a bug.

Good spot! I've seen a magnifying glass lower down the scroll but not tried it; frightened to 'cos past versions of various NewBlues have crashed MEP and lost me work.

I'll try it tomorrow - thanks

Any effect prefixed with NewBlue produces a black section - no picture - but now no crash so easily rectified.

Probably a bug, or it could be back to Nvidia problem of a few months back however using compatibility mode doesn't work this time.

Strangely, If I click on (to use my Magnifying glass example) the NewBlue prefixed OFX button but not apply it and then click on the unprefixed(?) Magnifying Glass, the buttons do not scroll back to the top, they stay where they are.

This is a known issue with the OFX effects.