I purchased this software a while back for the Humble Bundle sale (in order to get Sony Vegas Pro) like many others.

I thought it was nice and all, but haven't really used it at all. I think from what I did it works well.

But this is really starting to annoy me.

Every time my computer boots, I get this stupid spammy ad to buy more of MAGIX's software. It's year 2006 quality stuff. And I own the software.

I found another post about this issue, and it was silenced from the community by a moderator saying "this is a rant not a question" even though they were specifically asking how to fix it.

This is highly unprofessional and disturbingly immature. I don't know much about this company or their other software, but it is unbelievable how low they go.

But here is MY question; how would I remove the spam?

Ads have been becoming a very popular feature with software over the last couple of years.

In the case of Magix products the ads can be stopped by uninstalling Magix Network Sync.

This is a lot better than some software from very respected and reputable brands in which ads cannot be removed.

can you mention here , other software or hardware\drivers companies , who ever , that have spam popups in their software ? just curious.

If that's how it's gonna be , then I am done with software , and since software needs computers , then well , that too .

As I recall , the people who made "Popups" were also the same people who sold the Popup blocker software , As we all know they got busted for extortion . ( no one likes popups on their hardware )

I thougth it was Connect, not Network Sync?

AFAICS only Magix Network Sync gets installed now - it may have had a name change to avoid clashing with Microsoft Connect.

I don't see Magix Network Sync in the Windows Apps to be able to uninstall it, only Magix Connect, and it doesn't show up under Background Processes. I, too, thought that it was Magix Connect. Are you sure? If so, then how does one uninstall it?

Corel has a similar pop-up adverts that come up occasionally in the lower right of my screen, and they have adverts with PaintShop Pro upon startup (usually). These can be turned off, but not easily.

I rarely get pop-up ads from Magix, and I have a lot of Magix software.

Here it is in Apps

As you can see it was installed only 4 months ago. I have no Magix Connect.

The Network Sync dialog is shown below - is yours the same for Connect? 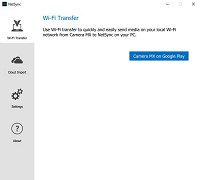 Nope. The icon in the hidden toolbar shows Magix connect, and opening it gives the following screen, in German, for some reason: 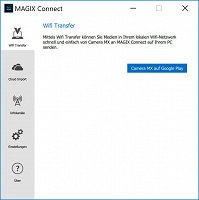 The functions are the same however mine is in English and the name is different. I do remember that I got a prompt that there was a new version and when installed Connect went from German, as your is, to Network Sync in English

Is there under About (Über) a check for updates option

There is no check for updates option. 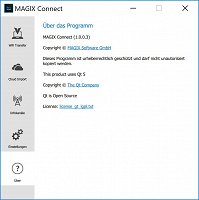 Updated MEP to the latest patch last night and Network Sync has been replaced with Magix Connect v 1.0.0.4 - looks like I am now back in sync (pun intended). 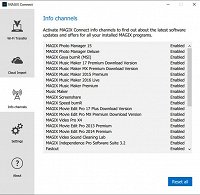 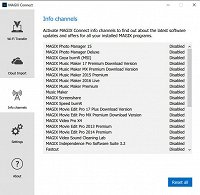 I have neither of these programs installed, but Magix still is giving me pop-up ads when my computer starts. I could maybe live with an ad when I open the program (Video Edit), but running an update check, replete with ads, at startup, without a way to switch it off, is in the realm of malware.

It is now called Magix Update Notifier - open it and it should look like the above.

Nope, no such program found. I'd previously removed all extraneous Magix programs -- don't remember their names -- and that stopped the resident program from showing up in the system tray, but didn't prevent the pop-up, advertising MEP 2020. So I'm wondering why my i7 computer is grinding away at startup, and then, after fighting it's way through my firewall and antivirus, the Magix pop-up finally appears...

The only other one is called simply "Connect."

I presume that you checked for "Magix Connect."