Please see this thread and make sure you follow the links given.

If you do not use the Magix Network Sync (it may be called Magix Connect) program you can uninstall it.

If you do use software for transfer via Wifi or the Cloud Import function then you can turn of the notifications by opening Network Sync and deselecting all the programs listed in the Info channel as shown below - mine is in German. 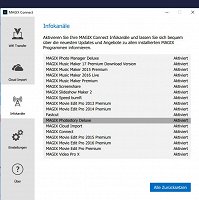 To open Network Sync click its small icon in the system tray bottom right of the Windows pane shown below. 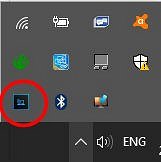 Any idea why this would be? Is there a way to switch it to English?

Perhaps because Magix is a German company and they simply "forgot" to translate the words on that screen.

Is there a way to switch it to English?

None that I am aware of, sorry. However the key word is "Aktiviert" = Activated. Simply click on it and it should change to "Deaktiviert" (I think that's the correct spelling!).

Whatever. Those pop up ads are so annoying. How stupid of them to do that. If they had put notices in the program itself when it is opened I could accept that but putting pop ups on my screen when I boot.... No way. Bye Magix.

Any idea why this would be? Is there a way to switch it to English?

The German is a bug and you can't change it directly to English, another bug. Change the language in Magix Connect to French, and then to English.

The bottom popup seems to be a relatively new Window feature that some companies are using to place announcement and adverts. Corel has figured out how to make adverts pop up at any time and has not provided a simple way to turn it off. Other software companies will likely also exploit this feature, so reinstalling all of your software on a new computer will likely give them the opportunity to install the start-up pop-up advert feature.

Magix has made it simple to remove Magix Connect or turn off the pop-up announcements. Magix Connect has several uses, one of which is to advise users of updates, special offers, discount coupon codes, etc. Rather than removing Magix Connect, you can simply disable all of the products for which you don't want to receive any news. Then, do not ever complain that you were not advised about an update/upgrade, special offer or coupon code.

Another use of Magix Connect is to allow cloud computing. This is a feature in programs like Movie Edit Pro and VPX. I don't know about Video Easy.

I usually get a popup when I turn on my computer. If it's interesting, I open it, if not, I don't. This takes a grand total of 2 seconds, so I don't see how this can be annoying to the extent that you state.

So put up with it. I choose to not. I have no problem paying for software. If I got it free I can see where they have the right to pop adverts at me but not when I have purchased it.

In any case, all their software is now off all our computers. Like it or lump it and do what ever you wish as will I.

So put up with it. I choose to not. I have no problem paying for software. If I got it free I can see where they have the right to pop adverts at me but not when I have purchased it.

No, I said to turn it off if you don't want pop-up notices. Some of us want the notices.

Put me down as one of the people who resent getting advertisements from Magix when I have PAID for the software. I was amused that in another thread, apparently the posters were too "emphatic", their posts removed and the thread closed. But the issue they were complaining about was not addressed by the company.

On top of that Update Notifier does not exactly give a strong feeling of professionalism or software expertise. When it comes up it's in German, even though all my installations are in English. I can't change the Language to English even though there is a control for that. Thanks to the person above, I changed it to a different Language and THEN to English, which partially worked. The legends in the top window were now in English EXCEPT for the top control which remained in German. Then, if you go the the Info Channels window, it it STILL in German.

Anyway, I set the Sound Forge item to disabled and will see if that fixes the problem during next reboot.