in my older magix software music maker 2014 it just said "add" in the instrument folder at the bottom of the main menu screen then it would find the folder of my vst instruments and add the icons next to the magix vst instruments but it doesn't have that "add" option in this 2019 version plus eddition it only shows the magix vst plugins and there doesn't seem to be a way of adding my own , does anyone know how to do this (this isn't the free version) thanks

The Add VST plug-in filepath is in the Program Settings, Folders tab

Thankyou , thought it would be as easy as magix 2014 where you don't have to go into settings cos its all there on there on the main menu screen

Thanks for the info, but I am a not very computer wizard.  So can you elaborate on what you mean by:

I am having a terrible time with the new Music Maker 2109, any help would be greatly appreciated.

Thank you so very much, but you can disregard my previous message, I found it.

BTW - here is a different issue, I purchased the Music Maker Premium 2019 and it did not download or even offer the installation for Sound Forge Audio or the iZotope?  Can you please help me with that.

Thanks, very much apprecited

I am having lots of trouble getting the VST's to work even when I the correct path is added.

Is anyone else having this problem?

Welcome to the Magix forums.

Your question is clearly related to the original thread starter but is really asking for rather different help.

Can I suggest you start a new thread with your question, to include the details in this post, not forgetting information about exactly which version and variant of MM you are using?

The Add VST plug-in filepath is in the Program Settings, Folders tab

i have music maker 2019 plus and there is no "Add VST plug-in filepath" in the folders tab.

nvm - found in a different thread that i need to download everything that i got for free with the edition i chose (means downloading all the soundpools features instruments etc) and creative suit in order to get the option. that worked so if anyones having the same problem do that ^

I have the same issue, but, with MMM Premium 2015. I recently got back into recording and wanted to take advantage of the STL-Emissary VST bundle. But, after downloading it I found that I couldn't add it to my VST instrument slot like I had originally thought I could. Any ideas on what I may be doing wrong? thank!

I have the same issue, but, with MMM Premium 2015. I recently got back into recording and wanted to take advantage of the STL-Emissary VST bundle. But, after downloading it I found that I couldn't add it to my VST instrument slot like I had originally thought I could. Any ideas on what I may be doing wrong? thank!

Isn't that bundle an effects bundle? Which means it would appear in the effects section not the vst instruments list.

@Graham-Hawker is absolutely correct! That VST is a VST Effect, not a VST Instrument. If it is installed correctly AND MM 2015, which is not rather old, can use it you should find it listed under VST FX.

It is however, unless I am missing a step, the VST's cannot be used with MMM 2015, there is nowhere to add it in the Master or Track effects racks, as in MMM 2019, and they do not appear under any of the VST or Audio Effects menus. 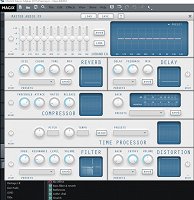 Added: Checking MMM 2016 the functionality appears to have been added in that version.

Just for the sake of completeness, if someone really still wants to work in those older versions: You can use external VST effect plug-ins in those as well. For track-based effects (including the master track), you'd need to enable them via the plug-in/insert slot of the mixer window. You can also enable object-based effects via the Object Effect Rack, which you can e.g. get by double-clicking an audio object. As opposed to the other racks, this one will feature an option for plug-ins as part of the unit at the very bottom of the rack. Also see the following two screenshots... 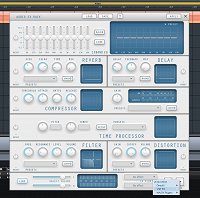 Looking at your images above, in MMM 2015 v21.0.5.54 the Mixer drop down options are missing, and on the Master audio effects rack, I do not see the same bottom panel as the Audio objects effects rack 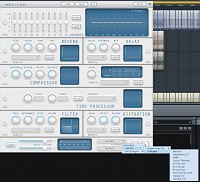 Is this a bug or am I missing a setting somewhere?

Doh, my bad! I was using screenshots from version 2014 above, since that was the old version that I happened to have installed on my new system. I figured it would be the same as version 2015. Of course, my attempt to cut corners didn't go unpunished. 😆 I just reinstalled version 2015 as well, and can now confirm that there are indeed no more plug-in/insert slots for VST effects in the mixer window - neither for the individual tracks, nor for the master track. This means that version apparently didn't feature any option to have track-based VST effects, as far as I can see. The possibility to apply external VST effect plug-ins appears exclusively in the context of the object FX rack.

I suppose my advice to @Simon-Gifford would be: If you want to have the effect for the entire track, and you can't live with this limitation of applying the external VST effect plug-in to each object in the track individually via the object FX rack, simply use the option to perform your free upgrade to the current Music Maker generation, by downloading/installing the free version, and then redeeming your old version's serial number:

Entering that old serial number will unlock a similar feature that you had in your old version, including e.g. support for external VST plug-ins etc. It will also unlock the software instruments that were bundled with your version 2015 via the in-app store system, so you can use them from the current version.

Thanks for the info, at least that solves the issue of where those options went. 😕

Hi.
My new music maker does not have the add vst button in the folder panel like the older version.

How do you add vsts here?

Welcome to the Magix forums.

That is the screen in the Free edition of Music Maker; it does not allow for adding of VSTs or VSTis. You need to have purchased either the Plus or Premium versions to have the facility to add them.

If you have purchased either of these two upgrades it would seem you have not registered and activated it and then downloaded ALL the additional content that is available.

Since you also seem to imply you have at least one older version of MM, did you also enter the activation key(s) for it/them? Again, this will allow you to then download all the content you have previously purchased, which is likely to include the facility to add VSTs.

So I recently purchased MMM 2020, because it was time for an upgrade; and while I am very happy with it I am a bit disappointed that I still can't utilize a Guitar VST that I recently got https://www.kvraudio.com/product/emissary-by-ignite-amps

I had this issue with the 2015 Premium MMM. Is there something I'm terribly missing, as in right in front of my face lol; or is MMM 2020 not VST friendly?

So I recently purchased MMM 2020, because it was time for an upgrade; and while I am very happy with it I am a bit disappointed that I still can't utilize a Guitar VST that I recently got https://www.kvraudio.com/product/emissary-by-ignite-amps

I had this issue with the 2015 Premium MMM. Is there something I'm terribly missing, as in right in front of my face lol; or is MMM 2020 not VST friendly?