I make 4K video's and upload them to youtube. But when they apear on youtube, it apears to be in 30fps instead of 60 fps which is the FPS my project is in. It does upload in 4K, but it doesn't upload it in 60 FPS as you can see here:

(Go to the video quality settings to see the difference)

For my video's, its important to have it in 60FPS for smoother coaster rides. Is it possible to do this with the magix Video delux plus 2020 Steam Edition? If so, how do I do this? (This is how it should be

. This video was made with my old editor)

Thank you for the help,
Temptica

Are you encoding to the Youtube recommended settings here and exporting to mp4 file and then using YT's own uploader?

Let's make sure I understand what you are doing.

Are you using Magix Video Delux Plus to do screen captures?

If so, not all file format exports from the screen grab section support 60fps at 4K.

However, once recorded they could be exported in other file formats at the correct fps.

@CubeAce
No, I record everything with Nvidea Expirience app. It records in 4K in 60 FPS. I'm now testiong a lot to see if I can find where I might make a mistake. I think the link you've send @johnebaker could help me out. I think it might have to do something with the bitrate, which might be too low for the video delux plus, I'll keep you updated!

Do you mean NVidia ShadowPlay?

We need a definitive analysis of a recording to determine what it actually is doing - use MediaInfo and post the results from the Text view.

Here is a screenshot with my recording settings:

Also, just so you know, the files are always recorded in slow motion. Then in the editor, I speed it up to the correct speed. This way, the video should look smoother, its a common used technique in planet coaster and flight simulators.

Thanks for the MediaInfo analysis.

Exporting and uploading to YT of variable frame rate video is not recommended - this causes YT encoding issues which may be why the framerate is reduced to 30 fps, it may also reduce the quality of the video when YT re-encodes it, at constant framerate this issue does not arise.

Movie Edit Pro expects a constant framerate video for best quality. There are many video converters which can do this - I use MovAvi.

. . . . This way, the video should look smoother, its a common used technique in planet coaster and flight simulators . . . .

I suspect that this is to overcome the issue of the capture not keeping up with the framerate of the game, ie it drops too many frames and reduces the framerate more to compensate.

In Movie Edit Pro I would also advise the following if you do not already do so:

Movie Edit Pro (VideoDeluxe) export presets are all at constant framerate - which raises the following questions:

This is the about window: 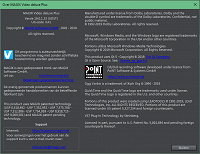 Here is the setting I use to start my projects: 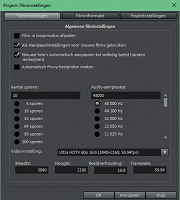 And I uplaod it with the Share, Youtube, Upload current movie as video, and then follow the progress, I've tried it once by just rendering the MP4 but it gave the same result.

Edit: So when I add the recorded video, it chanches to this: (sorry, its in dutch) 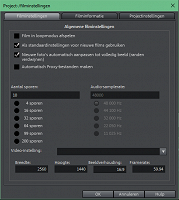 Aparently, Nvidea records it in a lower resolution than I put in the settings...

Thanks for the info.

It should record at your monitor resolution when recording full screen.

Hopefully you get some improvement.

Also, in the Export settings, if you don't see your project settings show up, click on Display all and open the popdown.

At point 5 in John EB's post, the manual way is under File, Export...