When a sound goes into ACL17 every max. level moves indicator segments up, but does not drop back until recording closed and reopened. This is new, I have been running ACL for over ten years, repurchased from 10? to 17, no difference for the work I do, had a few problems on the way thru, but fixed them. This one will not go away. It has been running on this computer since 2016, updated to windows 10 abot two years ago, no problems, nothing has changed, just the meters have got stuck. (some while ago he meters would not show the red segment, this was cured by repair), I have repaired the install, but still persists, any ideas?

I don't have ACL17 but do have a later version and have never seen this problem.

However, do a search in the installed Help files for "Peak Hold", which is the feature you are seeing. If it can be altered, there should be a setting that allows the peak to "stick" for a given number of seconds and then be released.

Out of interest, I did a search in the help for my installation of ACL, actually Sound Forge ACL3 and found this: 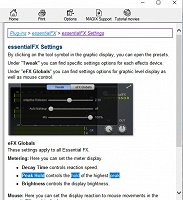 Maybe it will help you?

Since posting my question, and reinstalling again, then restarted the pic, it is now working as intended. But your finding that control, if it is on mine, I have never spied it, could be useful as with a second hold time, it will be acting more like a 'peak program meter' more than just peak. I have tried other similar things to replace ACL, but end up at the same place, I love the editing ability, especially the exponential cross fade, covers a multitude of sins used carefully. I make internet radio programs, do the lot on it, but to get a program to the correct (57 min) length, I cut one or two songs, only musically tuned ears would find the edits.
one thing that does annoy me, when I finish a recording, press stop, go to playback mode, the last section( seconds or many seconds) does not appear on the trace, can only be found by pulling the trace open more to the right, if this is not done, it is lost forever, it’s been there for years, just pull it out automatically now, but I have lost a few bits, did it to me tonight, usually when I do multiple stop starts on one recording.
before I posted I was looking at the questions, I was surprised the little knowledge people have of recording to start using ACL. I only use a mixer into an external sound card not internal sound card, that is reserved for other stuff, with a limiter between the two. I noted some comments that once broken bad sound cannot be unbroken, especially about reverb and echo, once on, never removed.

One more thing, when I do a program of around 57 min, on the 'total length' at the bottom, the export it, it loses 3 to 5 secs. I think that the process tightens up the edits. Have you noticed this, and what is the reason?