Greetings, having used virtually every MEP incarnation since it's inception I've just upgraded to MEP2017 Premium v16.0.3.66 from 2015 Premium and (not surprisingly) I find some things better and some worse than in 2015. So far the "worse" thing that is really aggravating me is the rotation editing, particularly when creating a slideshow.

In MEP 2015 (still on my system), I can rotate a picture from the preview screen (still can in 2017), rotate a picture using the vertical/horizontal etc. icons in the editing window (still can in 2017) and rotate a picture one degree at a time using the "radio" buttons (CANNOT do this in 2017. Actually I can BUT I need to really over rotate the picture and then the buttons work but come down/go up in TWO degree steps) and, after rotating a picture, I can switch to camera/zoom and the preview is shown at that angle (in 2017 the preview reverts to 0 degrees i.e. no change - move to a different editing section such as size/position, the preview is shown rotated. This makes accurate cropping tricky).

I think this explains the problem I have, if not I can explain further.

So my question - is anyone else having this problem? Surely it can't be my system as 2015 works perfectly. It seems so far to be the only glitch I've come across.

Having said that, don't get me started on NewBlue Video Essentials; they worked perfectly in MEP 2013. Still do in 2017 but when I export the movie without the NewBlue effect being selected in the edit window (for example with camer/zoom or sharpness selected) the video exports as a normal unedited picture.

Looking forward to hearing from you - Thanks AndyW

There would appear to be a odd behaviour with the rotate spinner buttons.

Just using the up spinner, mine will not go up more than 1 degree, however if you rotate using the angle dial first you can then use the up/down spinners to finesse the rotation within limitations - you appear not to be able to go above the value set by the angle dial or more than 2 deg if you pause and then use the buttons again. My buttons increase/decrease in 1 deg steps.

You can also enter the angle direct into the text box indicated in the image below, then use the spinners. 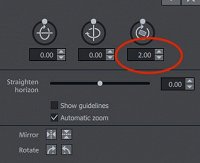 when I export the movie without the NewBlue effect being selected in the edit window (for example with camer/zoom or sharpness selected) the video exports as a normal unedited picture (my bolding).

Can I ask you to confirm that you mean exactly what you have written? You imply you are NOT selecting an NB effect. If that is the case, what do you expect to happen?

With reference to your other question re rotation: I can't directly answer that since I've never used MEP or VPX to export a slide show. If I have the opportunity later I will check out what happens for me.

John EB - Good to know it's not just me. You're getting exactly the same as me. File a bug report? Now you're inviting me to plumb the depths of  technology but will do all the same.

Jeff - I can see where the confusion arose. I DO select an NB effect, for instance Magnifying glass starting mid left of picture and panning to mid right of picture (boring I know but easy for this demo purpose) and this plays as expected as long as I still have the NB effect screen showing in the editing window. If I click back to camera/zoom the effect does not play. Click back to the NB effect window and it does play normally. Export while the NB effect window is up, animation is fine, export when the (for example) camera/zoom window is open the exported video has NO effect playing just a standard picture for x seconds. Hope this explains better.

I'm even more aggravated now, I did say not to "get me started on NewBlue Video Essentials" (only joking obviously)

Many thanks for the additional information. I've just tested what you wrote and selecting magnifying glass and then moving to camera/zoom does not lose the magnifying glass here. One thought: did you click the OK button (which "saves the changes") on the Magnifying Glass editor screen before going to Camera/Zoom?

Having looked a little deeper in the problem, with particular regard to you saying "did you click the OK button" I've noticed that the various elements (magnifying, fish eye etc.) are duplicated - one set prefixed with NewBlue V4 *** that are the (I suppose) idiot proof ones and the others with shorter names, just the effect name, which are the ones I know from 2013 and slightly but only just more complicated to use.. I must admit to not fully scrolling down the list and only noticing the longer named ones.

I've just tried my example with the short name ones and they work perfectly. It seems the others are bugged.

I don't really use them that much as I personally find them a little gimmicky, but now I know that when I do to use the tried and tested short name ones.

I raised a support ticket, got acknowledgment straight away and a reply within 2 hours.

It seems they accept there is a problem as it's been sent to Development for rectification so time will tell. I have to admit to being very impressed with Magix Support (so far); they seem to have developed along with their software.

I haven't used this forum before and I am impressed with the wealth of knowledge around. I used to contribute to the previous Magix forum which some of you may remember, and I recall that in those days (around 8 years ago?) to get an acknowledgment could take a week or so.

Thanks again for the updates. Re-reading your next-to-last message made me look again at the listing of those effects in MEP; I had noticed that everything seemed to be listed twice, but thought no more of it. And yes, I did choose to use the "shorter" name version when testing your problem.

I've just been back into MEP and tested the "longer" name version; this opens a completely different "editing" screen, lacking all the visual feedback that the "shorter" name one offers. The latter is what I would expect  to see (with a NB effect); the former seems to imply much greater integration with MEP since the editing screen is much more akin to that seen when opening a native MEP effect, without offering any real clue as to how to use it!

Interestingly, I also tested these effects and their settings in VPX; here, only the short names appear and selecting them opens the standard NB screen.

As implied by the response you received from Support, I think, MEP has problems with its use of and integration of these effects!

Anytime Jeff, I'm glad you did get me started on NB Essentials now.

There are also one or two other things I've noticed that seem to me to be a retrograde step, such as hotkey Z now just cuts and deletes leaving a gap without moving the following vids/pics to the left, in MEP 2015 hotkey Z splits and deletes moving all to the left. Or has it become a different Hotkey now? I must relook at it now that I've thought about it. It doesn't really matter in the daily course of things.

I think my main problem is I don't like change which is why with all the other versions I only bought every other years' which then left me with a larger learning curve than I liked as they all were "improved". I must be getting old. Ho-hum.

. . . . I had noticed that everything seemed to be listed twice, . . . I've just been back into MEP and tested the "longer" name version; this opens a completely different "editing" screen, lacking all the visual feedback that the "shorter" name one offers . . .

That is correct - the plug-in comes in 2 versions, the 'shorter' version is the original plug-in and the 'longer' version is the integrated, OFX, version. They both do the same thing, however the older one has its own active display and controls, whereas the new one uses the Preview Monitor to show the effect and changes made in the integrated settings panel.

@me_againI presume you are referring to the rotation spinners issue?

The U, Z and T keys still perform the same function, however what happens to other objects depends on the mouse mode.

The behaviour you are seeing suggests you are in Single object mode (6 key), try Single track mode (8 key) and All tracks mode (7 key)

Why then does VPX not show both versions?

Yes you're right about the mouse mode. This is slightly different to 2015 and I made the assumption that for mouse mode 2017 = 2015. Just goes to prove I'm getting old and forgot to RTFM.

The behaviour is odd in that not only both versions do not show there are other odd behaviours eg: NB Video Essentials 3 and 4 in VPX uses the old interface whereas in MEP Premium the integrated interface and Preview Monitor are used.

This may be related to the fact that MEP appears to be more advanced in some features which have not reached VPX yet.

The latest patch (v16.0.4.98) seems to have sorted the rotation issue apart from one small niggle. The buttons now work as expected but when I want to "fine adjust" the cropping with camera/zoom the image previews as having no rotation, but it does play normally. I can live with this though until such time as it may be put right.

Also, after only a few seconds playing I admit, the problem with the "long" version NB essentials seems to be sorted.

All in all a good and quick response to a problem raised.

Interestingly, I also tested these effects and their settings in VPX; here, only the short names appear and selecting them opens the standard NB screen.

VPX shows both here, but then I recently copied all the effects from MEP into VPX using Windows Explorer to avoid downloading all again in VPX, so this may be why I see something different.