Administrator Email has prompted me to rephrase my question.

Unfortunately I can't see any other way to rephrase it.

So it will need to go unaswered, Only the Magix programers know what's going on!

When executing a screen recording I set the quality to MXV:PAL.

Adjust the recording Frame to the area size of the screen I want to record.

If I ignore the setting and leave it on MEP: User Defined and start recording, I do not need to readjust the recording frame.

If I reselect MXV:PAL, I then need to readjust the screen recording Frame.

In previous versions once selected, MXV: PAL remained displayed in the dropdown.

Although now MPEG: User Defined is displayed, the recording behaviour is the same as if MXV:PAL is selected and I do not need to re-size the recording area frame.

Shouldn't MXV:PAL remain displayed in the dropdown box until I change it?

It would also make me wonder what Quality is being used as I would have thought if I am using the same quality there should be no need to resize the Frame.

What am I overlooking? 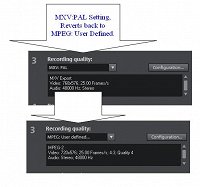 By resizing the screen area being captured your are creating a user defined recording - this you can see in the images you posted.

Why the extra 48 pixels over DVD resolution is a mystery!!!

Ah, ..... I overlooed the fact that I resized the captured area.

I was comparing it with MEP 16 Plus.... and it would just stay at MXV: PAL

Re your PM (which seems to have got zapped somehow now!) I'm sorry I can't help. I don't use MEP's own capture facility, preferring my old but reliable and intuitive CamStudio.