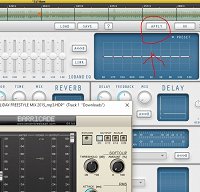 Did they remove the apply effect on mmm 2016 live?   i cant seem to find an apply effect button as it was on my mmm 2013.  This was real useful to have access to applying affects in realtime.

Where do you see this Apply effect button in 2013? I took a quick look but I don't know where you are looking. Can you post a screen shot?

It is in the object editor to be exact i use vst plugins for audio only and apply it.  I don't know why it was removed it was very essential for audio tasks.

There is no need anymore. You simply turn the top button off (Mastering Suite or on. Turning it on is the same as apply, as far as I can tell. It looks more intuitive to me now.

It does not defeat the purpose, cause turning  off  the mastering suite does not apply the effect.  In other words it applies it without rendering it on mmm 2013 and it does not do it on mmm 2016 live. 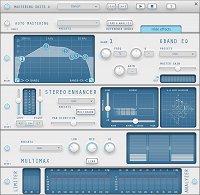 Your screen shot doesn't show the left side. There is no OK button either. The effects are on or off. The buttons are at the left, on or off for all effects. As far as I can tell, the effects are real time. Just hit play and turn off and on the button to hear the difference. 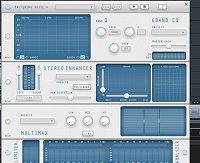 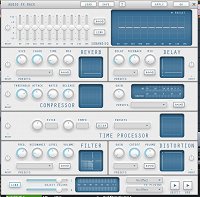 It does not matter whether the Mastering Suite effects or the Effects rack are displayed - with the new interface the method of applying the effect is the same - they are either on or off as shown in the image below - the indicated item is on the others are off. 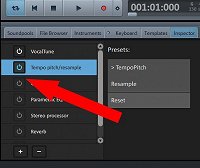 Ok, got it now. It would have helped if you had indicated Object Effects rack the first time round.

I believe that Magix has changed how it works and apply is no longer required. You simply open the object effects rack, and turn on what you want and it is applied in real-time. You always see what you have done. This was not so obvious in previous versions. Once apply was pressed, the settings were applied, and the on/off buttons turned off. Now you can always go beck to the object and immediately see what is on, what is off and what the settings are.

To see real time effect, use the reverb while playing back. The effect is applied as you change the reverb. With the Object effects open at the bottom of the screen, click on another object, give it some settings, click back on the first object and you will see the settings for that object, etc. The settings are retained with the object. Looks great to me.

Maybe you can explain in more detail the difference or why the Apply button is required. I can't see that it would do anything not already there.

Sorry browl 2 but for not indicating object effects rack in the first place, but the picture i sent did not look like the mastering suite or did it?   John Baker turning on the effect button on mmm 2016 does not apply the effect on to the wave file it just turns it on, in order to apply it i have to render it, meaning export the wave file.   Before i would apply the effect on the wave file and not have to keep the vst on and waste cpu and keep repeating and adding vst's until my heart is content, then go directly to music editor and edit more.  Now i have to do more work in which i thought it would be easier on mmm 2016 but now obsolete.   Go figure.  It is not required by you but for me it was a big plus but now gone.  i simply don't want an on and off button i want to appy the effect without having to export the entire wave file and then having to re upload the wave back onto mmm 2016.   with 2013 i could just apply and keep reapplying with out having to export and re uploading it.

I have tested all the effects in the Object effects rack with various types of audio file and they are all live and take effect immediately they are turned on, no exporting required.

Which effect is not live and what settings are you using for it?  If more than one, give one example only.

Whew, this was a tough one to understand!

You are quite right. In 2013, clicking on Apply creates a file with the effects and you cannot undo them, but...

If you are using a soundpool, say, then it is copied into the AudioTemp folder. When you click on Apply, a new file is created as in the following example:

and the object in the Arranger automatically takes on this name.

In 2016 Live, the file is also copied to the AudioTemp folder, but since there is no Apply button, this file does not get changed. You are right, adding effects and then opening the file in Music Editor does not bring in the effects. As far as I can tell, in order to do what you want, you have to compile the Audio for the track, under Edit, Track, Compile audio, shortcut Ctrl+Shift+G. This is indicated in the manual as Mixdown instead of Compile. This command will replace all objects on the track with a new file with the effects applied per object.

In Samplitude Music Studio, this is known as freezing a track. The difference is that in SMS, you can easily unfreeze the track and get back the objects with the live effects applied. There is also a selection to apply effects offline, but I haven't noticed that it saves it to a file; the offline effects can be turned off to get the original back with the effects now modifiable. There is also track bouncing. Complicated.

To be consistent, this is probably what Magix did in 2016, that is, removed the apply button and now you have to Freeze the track by compiling (mixdown) the audio. Once done, then you can edit the compiled version in Music Editor. If you want just a clip out of several on a track, you should first put them on separate tracks and mixdown only the one that you want.

Thus, the Apply button was probably causing problems with users who didn't understand that clicking on it created a new wav file with the effects applied. And then they were looking at how to modify the effects later but could not.

Hey broi2, that is why i new i had to export the file in which is what u call mixdown in order to apply (Record)  the affects on the wave file.   That is more time consuming on the new 2016 version so much simpler on 2013, That is why i felt  let down, because it was taken away.  It was essential for me in order to try to get the mixdown right on each track (wave file).  Still going to stick to 2013, and i will use 2016 for the other add-ons and updates, i just wish they had not changed that option.   Still dissapointed but i will manage.    I don't use the soundpools i mostly make my own loops then export each track individually as wave and then proceed to add effects and tweaking by applying it to the wav file, this is one of the reasons i thought mmm 2013 was quite worthy u can also do this  on mmm 17.  That is why i thought 2016 would have been a powerhorse but unfortunatly it lacked in my part.

Maybe they will add it on next year? but it is hard to say.  just let down.

Even going to Edit, Track, Compile Audio will mixdown the entire project, not just the track unless Solo is on the track. Strange that, because when I tried it before, I was sure that it only mixed down the track. The filename becomes that of the project unless changed.

Maybe you should raise the issue with Magix to see if there is some way to do what you want.

Better alternative is to move to Samplitude Music Studio, which is much more powerful.

Brwi2, yes i know that about exporting on solo, plus i have samplitude as well. still let down about it.

And, in playing around with things, like undo and mixdown, I managed to crash the program several times.

Do you have Samplitude Music Studio 2016? If so, did Magix make any major changes to the program like in MusicMaker?

I usually reset the program to default seetings, in order for it not to crash and start from fresh.   No i have Samplitude music studio 2013.