Getting no video transfer using Easy Video 5, Windows 10, Samsung SV-671B, and red video grabber dongle. Blue light comes on OK but no video is trtansferred. Samsung says video output is on Ch 60, which works OK when connected to a TV. How can I fix this?

That is for tuning the TV to the correct RF channel to see the video from the Samsung recorder.

Are you connecting for the Samsung to the video grabber with a SCART to RCA connector (yellow, red and white) ?

Have you selected the Video Grabber as the recording source in Easy Video 5 ?

Was Easy Video 5 installed before or after Windows 10 ?

I am connecting using Scart to RCA. I did select the video grabber as the source in Video Easy 5, although I am not convinced that the model offered is the same as the one I actually have, which came with a copy of "Rescue your Videotapes" Version 4.

Windows 10 was an upgrade from Windows 8, which was running Video easy 4 but not with the Samsung which I just got to replace the Panasonic I used before which has packed up. I bought the upgrade to Video Easy 5 because 4 would not run with Windows 10. Consequently VE5 was installed after Windows 10.

You could try re-installing the drivers for the USB device, though I suspect as you can see and select the device it is working properly - unless

The Panasonic packing up has also taken out the video grabber.

Many thanks for your input. I think the driver issue might be the problem. I tried downloading the red & white Videowandler 2 driver, which downloaded and unzipped OK, but when running the installation it came up with an error message at the end of the installation process (No 0x80096002) "The certificate for the signer of the message is invalid or not found."

After doing that it (Videowandler 2)  did not appear on the import options list within Video Easy 5. I am offered Magix usb videograbber 2 as an option, which I select, and then the "Composite" option which activates the "Continue" button, which clicks through to the import screen OK, but no signal is to be seen. However, the blue light on the usb videowandler is on.

So, it looks like I can't install the driver at the moment. What next?

I just tried repairing the Videowandler 2 driver from the original DVD, but that came up with the same error message, so it looks like a Windows 10 compatibility issue.

You need to turn on the Windows Identity Foundation 3.5 in Control Panel, Programs and Features as shown in the image below. 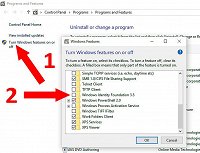 You should then be able to install the drivers.

Managed to get it working now. I have to confess I had the Scart in the wrong socket - D'Oh!

I also did your last suggestion but the same error message came up, so I did a restart and a new option came up in the import box for Line (USB 2861) which worked. The Macix Videograbber 2 option also worked for video but not sound. The USB 2861 works for video and sound.

Brilliant! Many thanks for your help.

It is always the simplest thing that gets you - been there many times   .

However thanks for coming back with the solution and happy editting.