we keep on working hard on our softwares and have just released new patches for Movie Studio 2023 and Video Pro X14!

We appreciate all your feedback and wish you a lot of fun at working on your projects!

And as a heads-up to all users to a potential problem!

(With apologies for unlocking this post) but I suspect there may be a problem with the patch installer!

For both VPX 14 and MMS Suite 2023, on running the update patch, when it ended I received the following error message (this is the one for VPX 14, clearly) 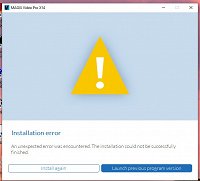 Choosing to rerun the installer produced the same error message again; choosing the option to revert to previous version actually opened the apps and, checking the build number, I saw that both were now at the latest builds.

So, either there is a problem with the patch installers, or I now have "defective" installations of both apps! Hopefully, it is the former!