Hello.
I am having issues when trying to transfer VCR tapes into my Magix program. It used to work fine, but about six weeks ago, something changed. Whenever I try to play something in my VCR now while having it connected to my Magix program, the recording will be freezing and/or be shaky.
I have been trying to solve this by the help of Magix support since mid October (so over five weeks), but gotten nowhere.
I've tried uninstalling everything and reinstalling from scratch. When I try to install the driver recommended by them I get the following error message "Please plug in video converter" and gives me choice to retry or cancel. It is already plugged in, but there might be something wrong with it. When plugged in all the way, there is no red light, when plugged in halfway I do get the red light.
If I click "retry" nothing happens. If I click "cancel" I get error message "Driver installation failed. Could not find the device for this driver". If I don't don't click on retry or cancel, the installation continues but gets stuck at 95%.
I'm not getting anywhere with support, first person I spoke to think it's not a problem with the video grabber, I have the red/white one. (The fact that it doesn't light up when I plug it in leads me to think there is"). He said it was likely related to my device or related to Windows 10 and that nothing could be done about it. This person closed the case after I din't respond for five days, so I had to open a new ticket and I am now in touch with another person from their support.
Based on my description, any idea what's wrong? I could probably get a new videograbber sent to me if I ask for it. I have tried both Magix Video Easy (version 6) and Rescue your videotapes (version 9) with the same result. I have also tried different scart cables, two different VCR's, different tapes, all with the same result.

I originally bought Rescue Your videotapes version 8, this came with the red grabber. I was later recommended to upgrade to version 9 by downloading which I did. I see this comes with a black videgrabber, I don't know if this is causing any issues.

When I try to install the driver recommended by them I get the following error message "Please plug in video converter" and gives me choice to retry or cancel. It is already plugged in, but there might be something wrong with it.

I have a suspicion that this may be the root of your problem! With the convertor plugged in, but without the driver being previously installed, Windows has installed some generic driver that it thinks is "suitable". It seems this driver may be blocking the installation of the correct one because it is making the convertor "invisible".

So, I would suggest the following:

Please post back and let us know whether you were successful in doing all this. 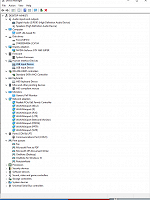 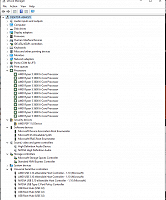 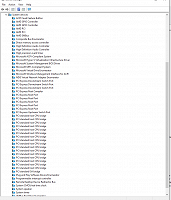 I see what you mean!

As a rather long shot, can you, in turn, right-click on each of the entries under "Human Interface Devices" and select the Properties option and take a screenshot of the General and Details tabs and then post them here?

I'm going to tag @johnebaker in this; he may well have more ideas to offer.

The USB converter must be plugged in so you can see it in Device Manager, it should be under Sound, video and game controllers, then uninstall it, if asked to remove the drivers do, as soon as that is done unplug the USB device.

To install the correct drivers do not plug the device in until asked to do so.

I knew there was something wrong with my original instructions to the OP!

Thanks John. I was able to see it this way and uninstalled the converter. Unplugged it and tried installing the correct driver but unfortunately ran into the same message as previously.

Can you show us the message on the screen behind the error message? I see a box labelled "Installation Results". What does it say?

Once the driver installation was "complete", did you then plug in the convertor? If so, what happened? 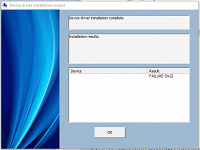 That is the message.

If I plug in the convertor and try to setup the 64 driver, the same thing happens. If I try to install the driver by clicking just setup, it says x86 will be installed but then I get this popup window saying "Please plug in video converter". If I click "retry" nothing happens. If I click "cancel" I get error message "Driver installation failed. Could not find the device for this driver". If I don't don't click on retry or cancel, the installation continues but gets stuck at 95%.

One thing I noticed that I haven't noticed before, is that when I plug the converter in this is how it looks in the device manager.

Other than mouse and keyboard, the converter is the only thing I have plugged in to the USB. If I unplug the converter this USB 28286 device disappears from the Device manager.

Additionally in Windows Settings, Privacy, Microphone, and Camera options ensure Allow desktop programs are allowed to access this device is turned on.

It's not worded exactly like that, but allow apps to access this device is turned on in microphone and camera settings.

I tried to download the driver following your link.

If I here click on Magix USB-Videowandler to I get this error message:

If I click on ignore or retry nothing happens. If I click on abort I get the following message where it says the videowandler could not be installed.

If I instead, from the first picture click on setup, the download and installation is seemingly working, but when I then go to the Magix program and try to play my VHS tape there through my VCR, the grabber won't show up. If I click on the arrow to see if I can scroll down, there's nothing there and if I click on the circled arrow nothing happens either.

They sent me a new video converter, the black Video Wandler 3.I uninstalled all the Magix programs I had, then reinstalled Magix Rescure Your Videotapes version 9. It then said install video converter which I did and it said drivers had been installed succesfully.

I then tried to play a VHS tape but colors were faulty. Not freezing or shaky, but something is not right. There is nothing wrong with the tapes or VCR's as I tried several different ones. I don't use this program at all but have you selected the correct VHS region, NTSC or PAL?

Is it an option?

That might have solved it. Thank you :)) I thought I had already changed this, but there was a default setting at SECAM instead of PAL I and when I changed this the colors became normal. I have not noticed any more freezing or shaking, so it seems it was an issue with the video grabber all along and the new one solved the problems, but I will do some testing in the next days to see it everything is working as it should before I consider this solved. Thanks for all the input so far.

Not had any issues in the recent days, so we can consider this solved. Thanks again.