I have only recently discovered that MEP2014Pro has the facility to print DVD (and case) labels. The main advantage to me is that it prints 'sideways' on the case insert, helping to find dvds filed in a bookcase. However, I find that the whole process is not very intuitive and I cannot find any instructions on how to use it. Can anyone tell me where I can find these instructions and under what heading? Thanks.

Are you referring Magix Xtreme Print Studio ?  If so there should be a PDF manual installed with the program.

I use Nero Cover Designer for printing the case inlays and Epson CD for the discs.

In all cases I preprepare images, logos etc in an image editor program, and bring them together in the appropriate program.

For covers the final composite image is a minimum of 2665 x 1840 pixels.and I print on a glossy 120 gsm paper - 160 gsm can be a little too thick. - an example of a compositte image for the complete cover is below.

Further to what John Baker indicated, I took a look at the Magix Xtreme Print Studio. I had looked quickly before but never used it because I have other tools that contain the templates for the labels that I buy, CD-Stomper and Avery. Xtreme Print Studio has neither.

Here is the interesting part.

In earlier versions of Movie Edit Pro and PhotoStory, Xtreme Print Studio was version 2 of Xara Graphic Designer 2, then it went to version 5, and is now at version 8. The look has changed between versions 5 and 8 and it now resembles closely Xara Photo & Graphic Designer 9 and 10, but without all of the bells and whistles.

I tried playing with version 8 and I like version 5 much better as it is easier to edit lines. However, that would be for creating some kind of artwork.

As for help, in version 8, Help does not work from the top menu. You have to go to Windows Program Start, Programs, Magix....and navigate to Documentation beneath Movie Edit Pro to open the Help file. This Help file is actually version 2, so the changes in handling in the program are not described, but it is close. Still, Magix should fix this.

Since I have Xara Designer Pro x10 (that doesn't work after re-installing my hard disk) and X9 that does work, as well as other tools that have the correct templates, Xtreme Print Studio is useless for me. If you have nothing else, then go ahead, at least now you know where to find the outdated Help file.

Here is the path to the help file in case you can't find it in the Start menu:

To John EB and John CB, thanks for your replies. I eventually found the 'Help' pages from the Start menu as suggested and I am working my way through them. It puzzled me that the file for XaraX was under the heading 'ENG' I assume this is short for 'English' but it was one of the last choices I tried. By the look of the file I suspect I may be back for more help! Thanks again, William

You're now probably further ahead than we are; you're reading the manual. Since the number and models of templates is limited, I thought I'd take a look at seeing if there is any way to bring in or create more but I couldn't find one, short of creating a template in Xara X9.

Xara uses an extension of .XAR for its projects, so any that you find can probably be opened with the cdprinter.exe program (Xara light). I found 51 instances under the folder MEP2014 - coverlabel, which corresponds to most of the templates. When you get one arranged the way you want it, I suggest doing a Save As, give it a name and use the XAR extension, and use it as a new template.

So far, one of the drawbacks is that I can't make the CD circle transparent to see the photo placed below it. If I place it above it but just below the inner spindle circle, I can't see outer circle. I will try again as this has potential.

Further to my message below, I found that with Xara X9, I have many Xara templates for CD and jewel box labels and inserts. I hadn't noticed this before, so for me, your question has been quite useful. I've found a new source of templates in a powerful program.

Let us know how you make out on your side.

For a standard case I use two images. The larger one for the back (with side labels needing folding) is most often a collage of 4 photos. I make that using a PSP8 'template' which looks like this on loading: 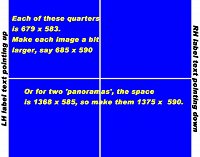 I drag in the four selected images and enter the text for the side labels. Its print size is 150 x 118 mm.

Examples of both types:

Hello Terry, thanks for your advice. I guess that PaitShop Pro 8 is not the one which comers with MEP 2013 plus?

I'll follow your advice step by step. So far as Magix Xtreme is concerned I'm still struggling with basic things. For instance, it says that when an image is 'dropped' onto the label it will size automatically if I hold the shift key down, well it doesn't!  I can see it's not too difficult to size it manually but it's another work around that I have to do. I'll get there in the end I hope. Problem is, I'm not accustomed to any printing programme.

Correct, PSP8 is not a Magix program (it's now owned by Corel).

I can't help you with Xara Xtreme so hopefully John CB or John EB will be along.

I prefer the simplicity, flexibility and above all the familiarity of the image editor I've used for many years. What is the equivalent editor for you?

Hello Terry, thanks for your further advice. I have tried Corel VSP pro, including its built in label printer. I like the programme and its printer and find it easy to use. Problem is, I can't line up the labels with the pre-printed adhesive print paper, but that's another story. I am keen on Magix Movie edit Pro as it seems to provide many more extras and templates etc. especially with the Catooh facilities. I'm not too sure about the newly discovered label printer as I'm still finding it difficult to use. The main advantage with VSP pro labelling is that I can print  folded edges vertically by typing a single letter, followed by 'enter' as in: M (enter) A (enter) G (enter), thus moving each letter below the preceding one. I can't do this with Magix Xara. I'll keep working on it, I can see this will take me some time and I may use  another printer as you have.