I have Magix Audio Cleaning Labs 2013 installed on the computer and am trying to reinstall my upgrade version of Magix Audio & Music Lab premium 2017 in windows 10 pro on the same computer.

Having had at one time a previous installation of Magix Audio & Music Lab premium 2017 , now uninstalled, running on this computer I have de-registered it on the Magix site.

The new installation sticks at stage 1of 4 trying to install Microsoft Visual C ++ 2013 as shown on screen shot. 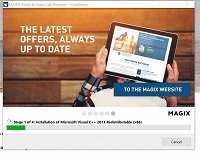 I can`t see that it is a problem with the Microsoft Visual C ++ 2013 as Magix Audio Cleaning Labs 2013 installed on the computer without a problem.

Any help would be appreciated.

@Henry-Pittam Maybe uninstall all C++ 2013 (x86) Redistributables from your computer and try to run the installer again?

Thankyou for your prompt reply

I have 2 versions of C++ 2013 (x86) Redistributables on my computer and am unable to uninstall either of them.