I am probably missing something basic but I have a great deal of trouble syncing clips from 2 cameras shooting the same performance. I can not get a reliable Auto sync from the sound tracks and the waveforms are too dissimilar to do it manually due to extraneous crowd noise being picked up by the camera shooting further back. The wide shot is too wide to easily match with the closeup visually without much fiddling.

One of the main bugbears is that when I drag one clip the preview image disappears untill you release it if one clip is shorter than the other, or iow the point I am trying to use like a drumstick hit set at the playback marker becomes the end of the clip in the preview monitor whilst you are dragging against the other clip.

There was a post back in May where some of you audio gurus @browj2 @emmrecs @CubeAce et al, gave some useful advice on a similar issue but I still find myself with the problems above.

Any more tips to help speed things up would be appreciated.

I fully understand your pain!

I'm afraid the only (almost) foolproof answer to this that I know is the same as I have posted previously, to use RedGiant software's PluralEyes. It is specifically designed to handle exactly this problem. Unfortunately, it is not cheap and, even more unfortunately, the latest version 4.x, has a serious flaw that means it tends to throw error messages that it cannot "read" any video file I have thrown at it! However, if you can get version 3.5, that works! RG Support even suggested that to me as a solution when I complained about the fact that version 4 still doesn't work properly even after a number of updates!

Essentially, what you do is open your two video and any independent audio streams in the app's workscreen, press "Synchronize" and it will "line-up" the two videos accurately. Pressing Export will then do exactly that, with "new versions" of the two (or more) files that you can simply drop into a VPX timeline, i.e. these new files will include as many "gaps" in either or both files so that they are both the identical length with all "content" aligned.

It's not just the distance delay times that will be in play but the acoustic reverb and ambience differences that would make for problems as well as additional auditorium noises. One way I have used to align the video in clips is to increase the transparency of the lower track to overlay on the top track visually. You have to ignore the sound track of the furthest recording or it can't be done.

I haven't done it for two different cameras but for two different performances of the same tunes. It's the only way I have been able to get more than one camera angle. It's very manually intensive but I can get reasonable results.

Try using snap markers at the most likely frame in each video clip for alignment, then drag one clip such that the snap markers line up. A drum hit should be a good frame to use but because of the speed of the drummer and because the cameras are not in sync, you could be out by up to half a frame.

I have been doing the following recently on some S8 Sound films to line up the sound as best I can with some visual/audio cue. To make it more complicated, the S8 was digitized at 20fps that I change to 18fps, but the audio was recorded into the computer using the phono out from the projector. The projector does not run perfectly at 18fps so I have to stretch the audio clip. I use 2 visual cues, hopefully one near the beginning and one near the end, 2 snap markers on each object (video and audio) and stretch the audio to get the snap markers to line up. Of course, doing so moves the first marker, so it's an iterative process, but the snap markers help out.

Thanks all for the suggestions.

Is there a way to nudge a video track by one frame whilst dragging in the timeline without zooming the timeline to 1 frame level, and like wise an audio track to less than one frame?

Glad to see I am not just being thick!

I had noted you comments about Plural Eyes but I do not do much of multi camera production or separate audio recording so I don't think I could justify buying it. I don't quite understand how it works but by it's name I presume it is actually analysing the video fames for similarities and the audio waveforms for a match..... but then how can it do any better than VPX if either is too different? Also how do you tell they are in sync once imported into VPX? Is it just that you make sure the ends are lined up? How does it export without losing a generation in the picture quality?

Yes the transparency trick is one way but as the wide shot is so different and has less clear detail I have found this tricky so have resorted to temporarily adding a 2 x PnP so the images are side by side and full screening the preview window. Still my main problem is that when I drag a clip the preview goes blind hence my question above about nudging.

I do not want to lose one sound track because both are compromised by the not ideal positioning of the cameras in the soundscape - the rear camera picks up the hub bub of the dance patrons and the wild camera has a better mic but is moving around on the stage coming close to monitors and PA speakers, so I am hoping to mix the two for a better overall result. In fact I have shot both with AVCHD and DD 5.1 so I can experiment with tweaking the separate channels for better balance.....and then I will really have created a job for myself...Eek!!

I have been using the snap markers and they are an invaluable tool.

I have also read you comments in searched topics you have commented in about the delay caused by the placing of the cameras and it does of course give a bit of a reverb effect and I initially put this down to a lack of sync. Can this be overcome to some extent by advancing the audio track on the rear camera?

My thoughts: For a start, try the offset command, one frame at a time to see if it helps. If you have an idea as to the distance of the rear camera from the music (or close camera), then do the calculation (1100 feet per sec) and make the adjustment by dragging the audio by that amount. Then, try adjusting this audio until the reverb mostly disappears. If you can get it very close, then when you make cuts to the video, you can make adjustments to the volume of one of the tracks, including a transition. Bring up the volujme of the active camera; decrease the other.

Sounds a reasonable solution but would personally cause me problems. In the timeline use the frame counter to see how many frames you have moved the clip.

How easy it is to move a clip one frame at a given timeline viewing size may depend on how sensitive you have your mouse set to for movement.

Ideally once I have a rough placement I cut the top and lower tracks, remove the portion I don't need from the top track and place the lower track clip into the top track. Then when sliding the track around I can see a blended image to sync. 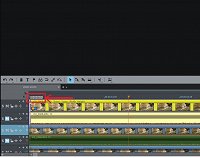 The image is just for example, it's not a project image.

Mixing the two sound tracks may not work well. Even if you get them perfectly synced there will be phase differences and different reverb times plus a possible amount of slap-back echo depending on the venue. If it was outside with no nearby structures, reverb, and echo are not a problem. But as far as I know there is no reverse phase button within either sound mixer or way to reduce Eigentones that will crop up from mixing two sound sources from differing distances and positioning around the sound stage. Trying to get a 5.1 surround sound track to work may be impossible to get to sound good.

I had no idea you were moving your closest camera around.

The other problem is the furthest camera, which because of distance, the audio is already going to be out of sync with the video action. If that camera was moved around then you have real problems getting the video section to match the audio as the sync timing is going to vary within the clip. Possibly back and forth.

It's always difficult to give advice when I am personally not there. I always keep one sound source static and move around with the second camera. I know this is not always possible depending on circumstance but ideally.

I must admit I wouldn't want to be tackling this myself.

Nearly forgot to say. One thing I always do is sort the sound track out first.