There's quite a few duplicate posts on the forum due to the recent discovery that Stem Maker has been removed from Acid Pro 10 with not so many definitive answers to questions.  After some investigations , here is some information I collected on the topic which I hope you may find useful to at least reduce the pain of that current situation. Feel free to make any further comments with any additional information.

Magix removed the Stem Maker feature from the recent update release of Acid Pro due to some unannounced licensing issues between Magix and the 3rd party underlying technology developer, Zynaptiq.  Full details unknown or announced. There has been some speculation on the forums that it is still included in "Acid Pro 10 Suite" based off of some Magix product feature comparison list.  However, I do not believe that to be the case.  I just finished going through installing the latest releases of Acid Pro and Acid Pro Suite as well as the previous versions, both latest release version did not show the Stem Maker button icon in the upper right corner being available.

Here's what I have been able to determine where in the Acid Pro release versions Stem Maker was removed.  Therefore, if you want to keep the Stem Maker feature you may NOT want to update or uninstall and roll back to the previous version.

Therefore as you can summarize Stem Maker has been removed from the latest v10.0.5.37 Build releases for both the Pro and Pro Suite versions.

If you found Stem maker useful, you will need to locate your installer for the Build 35 release, uninstall the updated Build 37 from your system and re-install/activate Build 35.

Here are the official release notes of the differences between Build 35 and Build 37.

· Localization: mistakes in the localization of the Store have been fixed

· Store: the Store is now open by default when starting up ACID

Personally, I was originally excited about the Stem Maker feature when it was introduced in Acid Pro Next v1.0. However, that's where the excitement ended. When I tried it out in Pro Next v1.0 the results on the songs I tried were pretty awful where I found the extracted stem tracks pretty much unusable. When Acid Pro v10.0 came out with what I thought was a v2.0 version of Stem maker, I again tried it out. Again the results I felt were pretty awful were the songs I used it on the stems were once again unusable. Unsure if it was improved or not between Next v1.0 and Pro v10.0. However, I did keep the stems from Next v1.0 from one song and compared the results of the same song to the Pro v10.0 extracted stems and they comparatively both sounded bad and unusable. At least for the songs I tried it on, YMMV.

So that's the dark cloud of bad news information, but I feel there is at least some silver lining solutions available. Deezer has came out with a Stem Extractor called "Spleeter" which is freeware, where other DAW workstations and audio programs such as SpetraLayers Pro have been using that within their products instead of zynaptiq's.

When I tried out some of the free Spleeter options out there, I felt the resulting stem extractions were at least 10 times better then from Acid Pro and more importantly, I felt the Spleeter stems could be useable in a remix project.

Here are some free versions where you can try it out for yourself.

*Limited to a 5MB upload file size, unless you become a member

My Personal favorite, is from this developer "Make It So" who created a GUI for Spleeter. The GUI makes things easy for non programmer types and gives you much more control of the available stem extraction adjustments with no file size limitations. 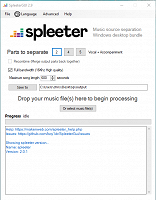 One word of caution/note. I originally had trouble installing the the Spleeter GUI app on my system. I kept getting a "missing DLL" file error message while attempting to install. What I was able to figure out, is that the installer is released as a .MSI file instead of an .EXE. On my system I need to install programs using "Run as Administrator" and since you are unable to do that on Windows 10 with an .MSI file, that's what was causing my install error woes. However, there is a way to work around this by opening up RUN CMD as an administrator and then running the .MSI installer file. When I did that, the program installed without a hitch and worked fantastic after install.

I was highly impressed with the stem extraction results while trying out all 3 solutions posted above. I was getting vocals stems which sounded almost as good as the original multi-track audio tracks. There was very minimal background instrument bleed during vocal stem quiet parts, which could easily be cut out if it became a problem, and very little flanging sounds to the actual vocals. Similar results with guitar and drum stems. I won't say they were perfect by any means but I will say they were impressive and more importantly use-able for a remix project which is the exact opposite of what I found when trying to use the zynaptiq stem extractor built into Acid Pro.

Overall, at this point I'm ok with saying good riddance to the Stem maker still available in v10.0.5.35 of Acid Pro. Hopefully, maybe that was one of the reasons Magix decided to just drop it, when they ran into a licensing situation with Zynaptiq and their solution in the future will be to integrate the Deezer Spleeter stem extraction in a future Acid Pro update/upgrade instead. Just speculation, but I would be thrilled with that solution.

It took a tonne of digging to find this page. There seems to be literally NO blogs on the open web about it, and thanks to Magix NOT notifying customers about the removal.
I took slow motion video of the program launching, as the STEM icon flashes during loading, then disappears.
Afterwards, I found that if you double click the toolbar where the icon resides, you can add/remove features (of which STEM was listed, but grayed out). I'm about five hours into the troubleshoot- it would be more thoughtful of Magix to it's existing paying customers to write and email and give us the options.
I agree with the OP, it's a horrid output, but effective for if there are just a few voices in the mix. Thanks BTW to the OP for citing some optional programs. That was aces!

Thanks @Rednroll. I raised the issue in which Stem Maker was removed to community manager a couple weeks ago, and have been told that it is expected to see a return in a later update. I don't have any more information about when that may be. Currently there are licensing and technical issues which were the reasons cited for its removal. I also raised that it wasn't not good to just have it removed without prior notice. So, hopefully this type of removal of a tent-pole feature doesn't happen without communication again.

Ideally we need betas running again so this kind of change would have been spotted, and better communicated - at the very least, by beta testers.

In the meantime I'll sticky your post and link it in the FAQ.

It's been a couple months and no update to re-add this paid-for feature. Who wants to bet it's going to be in 11 and we all have to pay (again) to get it back?

Nevermind whether there might be alternatives because that isn't the point. A paid feature that was highly promoted was removed without warning with no recourse. Companies have been sued over this kind of behavior (e.g. Sony when they removed features from the PS3).

If there are licensing issues, Magix needs to suck it up and shell out for licenses for the people that paid for the feature.