Hello. I have created a movie in MEP for my website. I want the video to play in 21:9 format (1920px x 823px). I created a new movie, specified my format/AR in the settings and edited the project. I am now ready to export the project, but I can't figure out how to export it in the desired AR. When I use the "Output as video file" option, I can only choose from 4:3 or 16:9. I did purchase the MainConcept MPEG-4-Codec and set it as the default (I saw someone on the forum recommend that), but it didn't give me any additional export options here. How do I export the movie I have created in the desired Aspect Ratio? (Using Magix MEP Premium Version 19.0.2.58 (UDP3). My computer is (Intel Core i& 8700 CPU 3.2G 16G of RAM) and my software is all up to date (Windows 10 Home).

Export the video using File, Export, Video as MPEG 4 and adjust the AR setting by clicking the arrowed button and change the values as shown in the image below 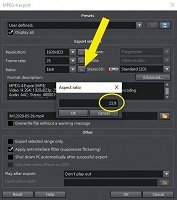 You will also need to check the Streamable option in the Advanced settings of the same export dialog.

I would recommend using the Default (Intel) codec for export.

Forgot to add that the pixel count vertical or horizontal should, ideally, be a multiple of 4. ie height of 823 should either be 824 or 820 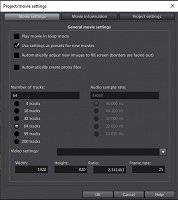 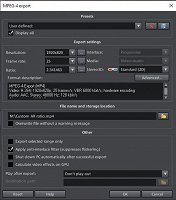 @johnebaker Thanks John, I knew (not) that 21:9 is actually 7:3 D'oh!! And I thought maths was a strong point of mine. Talk about not seeing the woods for the trees. As we say here, "Wake up Australia".

I changed the Movie Settings as you suggested to 1920x824 7:3, but in the Export dialogue I still cannot change the resolution to 7:3 (or 2.33333). When I try to export, I get the Customise Movie warning. If I continue the export, regardless of the Movie or export settings, I get black bars on the top and bottom (moreso for 4:3).

@AAProds Greetings , I assume you're trying to export to MP4.

As you've found MEP won't let you export MP4 to other than the 3 common ratios however try to export to AVI, Quicktime or even (I'm afraid to say it) WMV then MEP will use whatever ratio set in Movie Settings.

Interesting - here is the export I actually did using the settings I posted above and the MediaInfo analysis:

Setting movie ratio to 2.341463 has no effect for me on export to MP4. I use the generic MP4 codec that comes with MEP. Maybe that's the difference. Maybe I have a system setting that's not quite right? Maybe I just don't know what I'm doing even after 20 years or so of MEP.

Hmm, I need to play about with this.

@me_again, Andy, I did achieve an export with that weird resolution, but it required the technique I described above. As I mentioned above, one can export at whatever resolution one likes, but if it doesn't exactly match the movie settings resolution, you'll get black bars top and bottom.

WMV: I remember those days well! The only format for little website movies that worked reliably. MP4 was the big bad mysterious bogeyman then. 😀

No difference, I did too, in my first comment above I recommended the Default (Intel) codec, I have not re-installed the MC codec after the new OS install.

Mine is a straight default install, only changes are project folder paths.

The only thing I did do to the imported video clip (AR 16:9) after importing was to set its width to 1920 the same as the project - effectively make a section - though I would not expect this to affect the export other than not give black bars on the sides.

I have uploaded the Preset file here on Dropbox if you want to play with it put it in - it is 1920 x 820 as I mentioned above, put it in this folder and it will appear in you MP4 export dialog as 21-0 AR

This is for MEP 2020, if your version is different then the path needs modifying

Which player are you using to play the export? I am using Windows Media Player, Films & TV and VLC will not play it without putting black bars top and bottom, they appear not to conform to the video AR

You're 100% right. I missed that part and it made all the difference. When I follow your instructions and put the project setting for the AR in the export dialog, I get what I want. You're a hero. Thank you so much - and thanks to everyone else who commented as well. It's nice to know you all have found workarounds too. I have been using MEP for almost 10 years now and I keep learning! Thank you all!

I did some more testing after posting and discovered that although 823px is set as the height, the exported video is actually 822px high - you cannot have a partial pixel which is dropped by the encoder - AR 21:9 would mean the height is 822.857px.

Is there a reason why the height must be 823px or is this a rounding up of the true height for 21:9?

@johnebaker I also missed this bit. That works. I've deleted my technique.

I've discovered that learning to read properly is the key to learning. All is now working as it should although I'm not sure when I'll use it.

It's so nice and such a refreshing change to see someone who accepts user error is possibly the first reason for failure and not blame the program. Although there are certainly a few glitches within MEP that need sorting and is sometimes a cause of a problem, it's rare, so thank you for that.

Is there a reason why the height must be 823px or is this a rounding up of the true height for 21:9?

I was rounding up. I could go 824 or 820. Whichever I decide, I should stick with. What do you recommend?

I would suggest 824 as it is the closest to what you wanted.

Will do. Once again, I appreciate all your advice. I love this program and am enjoying learning more as I go. All my best!

Hi... I reached this post because i own both programs: MEP and VPX, and I was struggling with render a 9:16. What I learned is that despite both programs offer 3 aspect ratios, if you select "custom movie size" upon program startup, then the new aspect ratio will be acepted by the program in the render window.

Magix appear have made importing and exporting to portrait formats more straight forward with the latest VPX12:-

Check it out if you have VPX12 or the trial version.