We have received a digital copy of VEGAS forums from Sony and we will be able to offer all users a new home by the end of August. To this end, we're creating a new website in English and German. To make sure everyone feels right at home, existing user names and all posts and comments from the Vegas Movie Studio, Vegas Pro - Audio, Vegas Pro - Scripting, Vegas Pro - Video, Vegas Pro Production Assistant, CD Architect Software and DVD Architect Software forums will be included in this community. We will make all other sub-forums that no longer continued by Sony available as a read-only archive.

This means that you will be able to access your current accounts and continue using them in the future. All Sony Creative Software Community core features will be available to you in addition to many new ones! Here is a little preview: 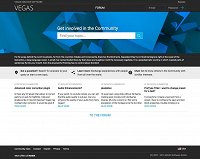 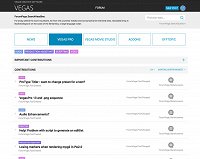 We will create an extra sub-forum for the Sound Forge - Mac, Sound Forge - PC, ACID Product Family and SpectraLayers Pro audio forums in our magix.info community. What both new and existing magix.info users can be excited about already: The website will be completely redesigned and get new features before the year's end!

Exciting weeks and months are ahead. We can hardly wait to be able to welcome you to our new forums!

This is all great news indeed. The "Form" looks very User Friendly and inviting.


Please offer Email Notification to threads. This is a great way to keep in touch and view new offers and solutions.

Great news indeed!  Hopefully there won't be a clash seeing as some of us had already registed here with the same names we use on the SCS forum.


@FantasticName: You can post your suggestions in this thread, write us an email at feedback@magix.info or send a personal message to this account.

@DeadRadioStar: There will be a little workaround, if you want to get access to your accounts for the Sony Creative Software forums, but there won't be a clash. We will provide instructions when the time has come.

Greetings @Magix_Redaktion, Glad to hear the e-mail notification future, and also the future solution to our multiple accounts later.

Nice and encouraging. I've chosen to keep my username from SCS forum, even though it's rather silly one ;(

Well, you could either wait for the copy of ''Hey Magix! Add this to Vegas MX'' or simply start a new topic; ''Users Requests'' or ''We Demand!'' :D

I've been reading you guys on SCS Forums on-and-off... Never bothered joining. I've used MAGIX video software in the past (before I went Vegas). It was clunky and buggy (even after many a bug fix), especially when the going would get tough (then it would become crash-happy). But it was always feature-laden. MAGIX (Pro) had 'ripple edit' way-back-when, and even on-preview-montor-text-resizing and such (way before we saw that in Vegas).

And just a quick note to some of you who were talking about ''Velocity'' in Vegas maxing out at 300%: you can ''shift/squeeze'' your clips, and then throw 'velocity' on it. This way you'll get to around +1000%. And maybe even Twixtoring the lot further? I haven't tried that yet, but it could work.

So the new community will be on the magix.info domain?  We would log in with our email/passwords from the Sony forum? I created this username on here a few months ago, so would I not use this one anymore?

Very excited to see the new forum taking shape. Disappointed that real names aren't required. Most websites these days require it. Having had my name misused in the past, I'd urge Magix to follow the protocol of most professional fora that require real names.

Either way, very excited for the new Vegas community, the enthusiasm and excitement the Magix Team brings to this new product, and I look forward to seeing friends old and new over here in a moderated setting.

Watch for new features in the various plugin tools that JR and I have created over the years, making Vegas even more powerful!

Will see how it works to get the old accounts back!

I have a suggestion for a new feature that I hesitated to post because I very highly doubt it'll be implemented.

I realize this would be difficult to do, but if it's possible, its usefulness would be enormous, and having such a tool directly incorporated into Vegas would be an unique feature which would cause countless jaws to drop all around the world.

I woke this morning to find that : "Oh Dave, I don't think you want to do that." : warning on the decommissioned SCS site.

Try on the Vegas Forum.