I have a Video Saver 4.0 package , but I am not satisfied with the quality. Do you have a better product?

This is a user forum. None of us work for Magix.

You say you want a better quality product. I presume that you mean a more sophisticated product.

Also look on the Xara.com website. Xara is owned by Magix. They have a special deal right now for Movie Edit Pro 2014 Plus for 50$, making it less than Magix is asking for just the regular product.

Ok, now I understand. The program and equipment is now called Rescue Your Videotapes. I use a product from a different company, but I expect that they all work the same. I looked at the tutorial for Rescue your videotapes. When you import, did you select the highest quality available? If not, this could be your problem.

If you did this, then how is the image quality on your computer when you are in the editor?

Did you burn a DVD with a high quality output and view it on the telly?

It would help us by giving more details of the settings you are using to capture the video.

Note - VHS video quality is surprisingly very poor - the pixel equivalent of PAL VHS is 335×576 pixels and you cannot improve on this by capturing at a higher resolution eg HD resolution.

You cannot overpass the VHS quality developped for small TV unit like 40 and 50 cm screen. Originally VHS was a maximum about 225 to 275 lines per screen. You work with 320 x 240 pixels now we work on 1920 x 1080pixels because the TV screen is 127cm and up. No software or hardware can rise the quality.

Try to capture in SVHS quality this is 640 x 480 pixels you double your quality, also you can try a moviebox to capture or something like Canopus card.

Are the VHS tapes you are trying capture:-

1.   copies of, for example hi8 or VHS-C tapes,transferred to full size VHS tape?

2.   original VHS-C tapes from the camera?

5.   Are you capturing directly from the camera or some other playback device?

I just made a search on panasonic website, your camera is a digital or DV camera using a memory card 8meg and a DV tape in you can link directly your camera to a computer using a USB cable from the camera to a USB port on a computer. The quality must be high because is mpeg 4 format of [1280 x 960] or [640 x 480]. You can download the manual from Panasonic website. Using the camera with a composite cable (Yellow, Red and Black) you cannot go over 320 x 480 that is the reason you lack quality. You have a good but old camera 3CCD and if you use it with DV tape you can produce high quality video.

You have not really described what you mean by poor quality.  Do you mean that there is jitter on the screen, or is it just video resolution that is not what you expect.  Since your camera can record in SVHS, I hope that your original material was recorded in that mode and also that you recorded the material at the highest possible speed (you said it was vhsC tape).  You also did not mention what type of TV you are using to view the playback.  If you are using an older analog TV, I have no doubt that the original tape version will look better than the digitized version.  If you are using a newer digital TV, I would expect a similar result.  The reason is that TVs are made to deal with the "variable or messy nature of a analog source".  PC capture devices need a more orderly signal to create a good quality video display on the TV.  This requires some form of time base correction.  The stick type capture devices are notoriously bad for creating a decent capture.  Even some of the more expensive ones have the same problem.

Here is a description of a product and what it does from a time base and processing point of view.

The AVT-8710 is a multi-system time base corrector/frame synchronizer that accommodates most NTSC, PAL and SECAM video signal standards. It eliminates picture jitter and time base errors from videotape playback and insures a stable on-screen image through the use of dual-field full-frame reconstruction. It restores distorted or misshapen vertical and horizontal sync and color burst signals.

An integral processing amplifier allows the adjustment of Brightness, Contrast, Color Saturation, Hue and Sharpness. A digital comb filter provides superior video signal decoding and the AGC (Automatic Gain Control) insures a proper 1V output signal from an input signal range of 0.5 to 2.0 volts. A built-in color bar generator sends out a test pattern when there is no video input. The unit has composite video and S-Video in and out and comes with an external 15VDC power adapter.

Multi-Standard  This unit will process NTSC, PAL and SECAM video signals for time base correction.

Color Bar Generator    A built-in color bar generator sends out a test pattern when there is no video input.

I have not used this product so I can't really tell you how well it performs, but the claims are in the righe direction of giving you better quality on a digitally captured video.

It cost about $230 US and has pretty good user ratings.

The two best things about this device is the ability to keep the video output signal constant and the elimination of time base errors which are both a curse for trying to digitize video.

This only allows you to copy images from the memory card or use the camera as a webcam.

I have gone through the manual and can find no reference to using the DV port for output, however as this is a Panasonic I would expect it to follow the standard other Panasonic cameras have.

To get the video off the DV tape (not VHS-C) you need to use the Firewire cable (iLink) to connect the camera to the PC through a Firewire (iLink, IEE1394) card.

If you computer does not have a Firewire card then you need one installed - no guarantee this will work if the camera is an oddball and does not support DV out via the DV (Firewire) port.

The camera should then show up as a device which MEP will see and should be able to control from the PC - see the VideoEasy manual under miniDV recording.  This will give you the best quality. 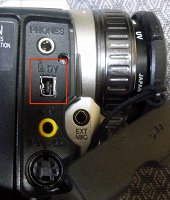