This thread follows along from VPX Color Space thread, and discusses adjusting for luminance levels, or what most would term as brightness levels.

I would like to know how others do this, particularly for changing light conditions over the duration of a video clip.

In VPX11, I have set up my template for:

I will not go into White Balance, which seems to have its own set of difficulties.

There are several ways to make adjustments to the luminance levels, which is usually the first thing to do for colour correction:

What not to use: Brightness!

In the image below, this frame has the brightest level of the clip, i.e., the highest point in the Waveform Display, at just over 90.

The frame in the image below is at about the lowest upper level of the clip, at just under 70.

The idea behind Luminance Level Adjustment is to get the brightest points up to almost 100, unless one
wants something else.

If one uses this last frame and brings up the top of the RGB curve by dragging it to the left so that the brightest part is just below 100 (X=170.3), gives: 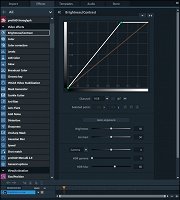 However, moving to the brightest part of the clip, the brights are now crushed against the 100 level. Compare this to the waveform in the first image.

Thus, one should look for the brightest part and make the adjustment there. Here are the before and after adjustments:

However, going back to the darkest part (at 2:08), this part could use some lift. Keyframing is required.

So what to do?

For anyone following this who is using MEP and does not have the Waveform and other instruments, what not to do is raise the brightness. Doing so moves the entire waveform upwards. Below is the result of raising Brightness to 86. The top moves up, but the darker parts move up and closer to the brighter part, reducing the dynamic range. Terrible result.

Thus, use Gamma. I reset Brightness and raised Gamma to 74. This brings the brights up, but leaves the darker parts at the bottom and stretches the shades in between.

This is almost as good as raising the RGB curve to about X=170.3:

However, a little bit of the definition seems to be lost. Increasing Contrast to about 53 or 54 may help.

Below with the RGB curve at X=237.4 (set for the brightest frame) and keyframing gamma gives fairly constant luminance for the entire clip:

Note that trying gamma high or mid does not have the same effect and is actually worse.

If the RGB curve has been modified, as I did setting the top point to X=237.4, clicking on Auto Exposure will crush the brights up at the top:

Reset RGB curve, turn on Auto Exposure gives (at the location of the brightest part of the clip):

Below is the waveform at the darkest location. Auto exposure only raises this slightly, similar to raising the RGB curve to X=237.4, thus keyframing Gamma will still be required:

Of course, applying Auto Exposure at this point would blow out the brights for the rest of the clip.

Conclusion: With a clip that changes exposure (upper brightness level) over time, try first Auto Exposure or Auto Color, then make adjustments using Gamma and a slight amount of Contrast, if necessary.

Alternatively, at the brightest frame, adjust the upper level of the RGB curve to bring the brightest part close to 100, 95 is probably best to avoid blowing out any brights.

Q1: Is this what others do?

Q2: Is there some other way?

MEP ONLY: Movie Edit Pro 2019 Plus/Premium does not have the colour curves. Strange, because PhotoStory Premium 2019 does.

Alternative solution (especially for MEPP): Use New Blue ColorFast 2 if you have it. It contains scopes, like the Waveform monitor.

Q1 & 2 - wrt to MEP that is when I switch to VPX for curves and colour correction.

Q3 - MEP 2020 does not have this yet, it is interesting that Photostory 2020 does, I guess it will make its way into MEP, possibly at the next major update.

For colour correction I use a technique that has been used in the printing industry for over 30 years with the digitization of scanned images.

I first came across this about 20 years ago in Dan Margulis' book Professional Photoshop 5: The Classic Guide to Color Correction and the method still hold today.

It is easy to use for still images in any image editing software that have the Curves function and is easier to do then describe.

For video, I gave a brief description of the technique and an example of this back in June 2016 here.

Did VPX get the Colour dropper with RGB values indicated? I cannot find it, however I do remember a mention in another topic not so long ago ie within the last 18 months or so of an alternative which is in one of the effects (NewBlue ?)

As I indicated in the other thread, here is what happens to the image in the snow when I raise the luminance using the RGB curve"

I'll post a side-by-side video so that you can see the impact of keyframing gamma (luminance).

Notice that there is a bluish tinge in the snow at the left and right, but not in the middle. That is a different problem and one that I probably would not try to fix, but could using a gradation mask, I guess.

As I mentioned in the other thread, there is no colour picker in the place where we need one, like under Brightness/Contrast. However, there is one under Glow that you can use. The only problem is that it gives RGB from 0 to 1.

There is also Gamma, which affects the contrast and brightness.

The only problem is that All and the colours cannot be done individually, thus you can't have an overall luminance adjustment and tweak a colour at the same time.

The Effect LAB Color also has a Lightness effect that could be used, so one could use a combination of LAB Color, Color Curves and Levels. Interesting.

Here is the video:

Some of the definition is lost but can be brought back in by adjusting Primary Correction/Gamma upwards, or Gamma Under Brightness/Contrast downwards.

I notice that ColorFast seems to introduce a redish tinge in the middle white part that would need to be corrected with the Color picker, white strength and tweak commands, I presume.

The interesting part is to scrub along the clip with the Waveform turned on, no effects applied, and watch the Waveform graph as the brightest part goes up and down. That is when you realize that you can do something to improve the luminance. Without the scopes, you are at a huge disadvantage.

Thanks for the info John.

Although it's difficult for me to assess without the tools it shows that some tools are better than others for specific jobs.

I have to say though that on my monitors there is a slight emphasis toward a green tinge than a red one. But then again at the moment my monitors are set to an Adobe profile. Worse the two monitors have differing amounts of tonal gain between black and white with the NVIDIA card giving me deeper blacks and brighter whites than the monitor plugged into the Intel chip that no amount of colour profiling is able to rectify. They are identical monitors and if I switch connections, the second monitor has the better tonal resolution. So it looks like I'm going to have to get one of those dummy head things for the Intel chip and connect my monitors to my graphics card to get identical output to both.

It is useful to look at the controls in MEP as being like the traditional controls on a TV or monitor.

Auto Exposure achieves this automatically by pushing the brightest part to 100% and the darkest down to zero. This works fine for a locked off shot whose composition changes little but any camera movement or zoom that changes the scene usually causes the problems you describe because of the nature of consumer cameras where the AGC is nearly always active along with some other automatic contrast or backlight control. These are supposed to make things better but often do not leading me to spend a lot of time dealing with the problems as you describe.

My method depending on the shot is:- with the RGB parade up

Try Auto Exposure and sometimes Autocolour at different points in the shot - usually on a frame that is in the mid contrast of the other frames, or on other frames to get a different overall effect.

Bin that if I can not get a half decent look, or carry on tweaking.

Adjust curves by creating some kind of S curve depending on whether there is a problem in the bright areas where I will leave the top of the curve where it is and drag a point below it to the right and push above the middle to the left to give it some pop.

If I want some blacker blacks then I will drag the bottom of the curve to the right to get black down to zero and then often use the HDR gamma at about 10 to 20 to bring out detail and give it some pop in the darker areas. HDR is very useful because it does not change the brighter parts of the shot.

Fluctuations in brightness and contrast I usually deal with by KFraming the Selective Brightness control in conjunction with KFraming the Contrast at the same temporal points (if I can be bothered).

As you inferred it would be good if the Curves could be KF'd instead, but I have had some success with extreme fluctuations within a shot by employing the NB Auto Contrast plugin that does a reasonable attempt at correcting dynamically thru the shot.

On the RGB Parade instrument I keep an eye to see if any of the colours wave forms appear to be out of whack with the others and use any of the controls in Color or Secondary CC to correct.

@johnebaker's Colour balancing / correction method is a good method but often a shot may not have a neutral object in it, or it is too small to distinguish in the RGB waveform display to check the level across the 3 x colours in which case I create a window over the object with the Section command which excludes the other objects giving me a clear view of the colour levels in the parade.

BTW that pink area in your snow shot may be due to one colour clipping which you would see more clearly if you use the parade.