I decided to purchase the new MEP Pro Premium (Version 19.0.2.58 UDP3 UG Code 8445 KA2) as I have been using MEP Pro Plus for several years without any issues however I'm have problems with the new Chroma Key (Green Screen) effect. Two problems:

1. In the previous 2016 version all I had to do was click the 'Stamp' button and then adjust the effect. This worked fine for four years without problem. Now the new MEP Pro Premium 'Stamp' button only turns the green screen gray and does not remove the gray no matter how you adjust it. The only way I can remove my green screen is by using the 'Color' button to specifically remove the color selected. Even when I use this the quality is still very poor compared to earlier version. Any solutions?

2. The second problem is that in the 2016 version I could save the chroma key as a video effect and then apply to all my other files however in the newer version I can't do that. This is incredibly frustrating because I have to repeat the chroma key adjustments for each file.

What is the purpose of buying a newer version if it's more difficult than the previous version? I have uploaded a video to show you the 2016 and the 2020 versions side by side. If you can't see the video here than I uploaded it to YT here:

Thanks for any suggestions. Have a nice day.

You are not the only person to have had a problem with the Chroma Key feature in the newer versions of MEP.

We have seen similar posts here before with people just as frustrated. I don't think in this instance that your computer specs will make any difference to the outcome but it seems the quality of the green screen you use and the lighting may do as the newer version of the chroma key editor is more sensitive than the old one.

You can see the problem in another post here.

This is, as @CubeAce has commented, a known issue - it does work correctly with specific shades of green, other shades turn grey.

The workaround as you have found is the Chromakey Color option.

The option is under the same button as in 2016, or do you have a different issue, eg it actually does not save the effect?

The option is under the same button as in 2016, or do you have a different issue, eg it actually does not save the effect?

As you see in this screen shot when I select the file and press the "-" button I can copy video effects but when when I press Shift + "-" to apply it does NOT paste the chroma key effect (as it did in the 2016 MEP). However when I save the file's effects (Alt+-) I get the exact same selection and when it is loaded it DOES paste the chroma key so for some reason I can't copy/paste effects inclusive of chroma key. Not sure why. Do you think there is any hope that an update will be offered that will correct this chroma key problem?...Thanks for your comments above 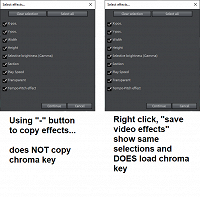 I know, from contact with Magix Support, that a new version of MEP is due for release imminently so I doubt very much whether there will be any further updates to MEP 2020.

Clearly, if your Update Service is still current you will receive this new version automatically.

It appears we are talking at cross purposes here.In your first post:

This I took as being this option, which saves the Chromakey Effect settings used.

This option saves all the selected effects added to a clip as single suite of effects. 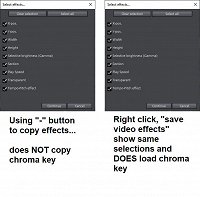 I do not see the Chromakey option in either of the images you posted above, they appear to be identical !

Using the - key to copy effects and Shift + - to paste effects works for me including Green screen (Green box) - same version 19.0.2.58