This is a tutorial for anyone struggling to understand how Effect Masks are meant to be used. It was done using MEP 2013 Premium but the steps should be identical or very similar in earlier premium versions. 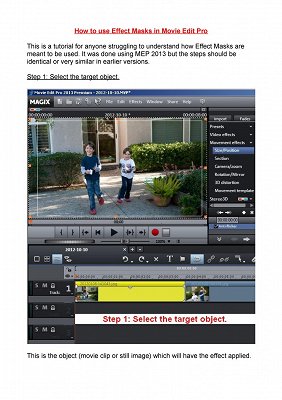 I am using Movie Edit Pro MX and the folder EffectAlphaMasks is empty.

How to fix that?

Have you downloaded all the extras?

Not what I remember!

How to do that?

The PDF-file You created said: How to use Effect Masks in Movie Edit Pro

But it is: How to use Effect Masks in Movie Edit Pro 2013 Premium

In Movie Edit Pro MX You can´t use that Effect Mask You pointed out in Your PDF-file.

That effect mask Oval8_1920x1080.jpg is included in MEP 17, MX and 2013 (premium versions) assuming you've added all extra files via Help > Free download. And as the tutorial says, it's just an example. There are 34 in the folder here.

And the post clearly says: "It was done using MEP 2013 but the steps should be identical or very similar in earlier versions."

Thanks for trying to help me.. but the "help" menu will not let me download any "free download".

Please look at this page and down the page You got the comparison.

Now You can see that I do not have "Effect masks" marked... but You with "Movie Edit Pro 2013 Premium" have it marked.

I think that is why I cant´t follow Your tutorial.

Yes, I agree. Effect Masks is one of the features not included in the basic versions (both MX and 2013).

Looks like I've slipped into the bad habit of assuming everyone knows I have the premium versions. My tutorial was carelessly headed, and should have explicitly said 'It was done using MEP 2013 Premium'.