How to use multiple masks to pixelate more than persons face or objects in a video. 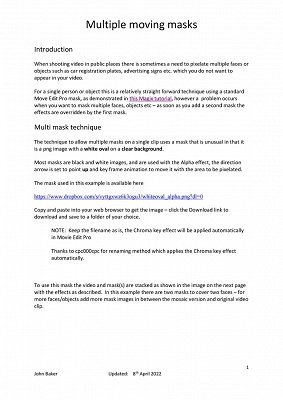 Thanks John for this tutorial.

However, I am using MEP2014 plus and your instructions did not work in this version. When I stacked according to your instructions I got the reverse of what was expected: the white part was clear and the clear part was mozaic (I used sand). When I added the second .png in the stack as illustrated, it had no effect. So I tried something else: I reversed the order of the two videos, on the first line I placed the normal video, on the second line I placed the .png and on the third line I placed the sand/mozaic video. That worked. But, when I inserted the second .png below the first one, again there was no effect. So, I copied the sand/mozaic video and placed it on the fifth line and a .png on the fourth line. So, the sequence was:

Now both .png appear on the normal video.

Well, I may be doing something wrong that the stack you recommended did not work for me.

Although the stack I made in the comments above works fine, the stack you provided in your pdf file needs a bit of extra explanation. You mention chromakey but you don't mention what to do in that effect. The effect was a clear circle and a sand effect on the outside of the circle. (I use sand for distortion) So, to get the right effect I reversed the two videos and that seemed to work except that adding the second whiteoval_alpha.png did not add a second oval. To correct this I added a second video with sand effect and a second whiteoval_alpha above it. That created the desired effect. But I was going the long way 'round. After sleeping on it, I wondered why you mentioned chroma key so I took a fresh look at that effect. At the bottom of the effect there is "Threshold Video 1" and "Threshold Video 2". The knobs of these two need to be reversed so that "Threshold Video 1" is all the way to the right and "Threshold Video 2" is positioned all the way to the left on both whiteoval_alpha.png  Now the desired effect of two ovals over two faces is achieved and size/position can be used to follow the faces.

I hope this clears up any confusion.

I would change my vote from 4 stars to 5 stars if I can find out how to do it.

I highly recommend this method. It should work in all versions of MEP but I recommend MEP2014 as there is no waiting for the effects to be compiled before viewing.

A whole step by step video need to be done on how to do this. This is not working for me I am using I am using MEP2014 plus. Its so confusing.