2014.02.18 - I changed the video again, will know on Wednesday. I exported this time as wmv, not the flashplayer as recommended by Magix. If the video doesn't work, look at my comment below as I have also posted the video in Dropbox, and it definitely works there.

Some Magix users may have obtained the Vasco da Gama route animation program and want to use it with more detailed maps than the earth map that came with the program.  The resolution in Vasco da Gama is limited thus zooming in on a small area or region may not have the desired detail. Vasco da Gama allows the user to import external maps and use them. If the user wants to import a map of a smaller area than can normally be zoomed into with the program, the solution is to hide the map of the world,  import an external map and place it on the globe for use in creating the route animation.

Movie Edit Pro and PhotoStory have a Travel Route Animation program built in. However  the program is limited to the use of  OpenStreetmap and only a few tools are available. One cannot import an earth view or any other map. So, for those of you who want to use your own maps to create a hiking route, for example, and have more tools and effects, Vasco da Gama can be used.

This tutorial takes the user from getting a map with Google Earth through to editing the route animation with Movie Edit Pro.

The main steps include:

Normally in Vasco da Gama, the imported map would be placed over the original terrain and stretched to fit. However, the area that I wanted was too small to do this and there is a zoom limit in Vasco da Gama that would not allow me to zoom in sufficiently on my imported map. The solution was to import the map at a larger size, one that would permit zooming in to allow the level of detail desired, without making the map so large that it would distort the edges when wrapped on the globe. Placing the map at the equator limits the distortion.

I did not go into many of the features of the programs as the goal of this tutorial was to show an alternative to Travel Route Animation and how to use Vasco da Gama to create a route using imported maps.

Unfortunately, the earth map that I used in the tutorial shows snow when I wanted summer. Oh well. 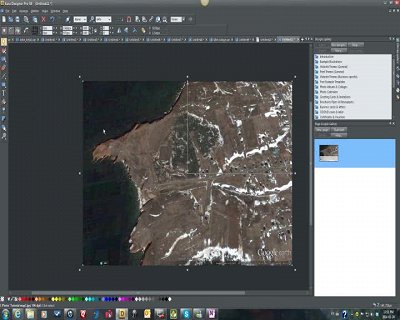 2014.02.15 The modified uploaded file still does not work. Here is the version above but from Dropbox. It is the same as I uploaded to Magix Tutorials, except it works......I hope:

I will try a different export version on Sunday night.