Hello everyone. I am editing full HD and 4k video within Video Pro X. Whenever I hit the play button, there is a delay before the audio kicks in (even though the video is playing happily). The specs on my laptop are very decent, so I am baffled. Does anyone have any advice or suggestions for me? Thanks.

It would be very useful to have more information about your laptop, very decent or not! This post will show you the sort of information that would be invaluable to us as fellow-users; like many others here, I've actually put the specs of my computer into my Signature (below). Perhaps you could do the same?

As to the audio issue, I suspect it is at least linked to the settings highlighted below:

Hello Jeff. I have attached a screenshot of the laptop specs. I have tried moving the audio buffer up and down, with no effect. 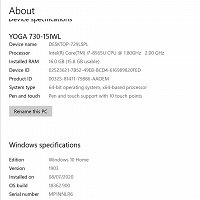 Are you using on-board sound or do you have an external audio interface? What audio driver type are you using? Does the audio Sampling Rate and bit depth of your imported video match what VPX is expecting, normally 48kHz, 16 bit? Are you running the latest version of VPX (18.0.1.80)? Any reason why you are still running Win 10 1903, rather than at least the 1909 release?

Sorry for the questions, but if altering any/all of those Audio buffer settings makes no difference we need to look elsewhere.

Actually, one other question (!!): does this problem occur on any first run of VPX (i.e. when the program is initially opened)? If not, when it does happen later, does closing and restarting the program clear the problem? I ask, because I have experienced a slightly different manifestation of the problem and am just wondering if yours could be similar. (In my case, if I am editing along the time line, make the changes, then go back to an earlier point on the timeline, when I restart playback I often initially hear a very brief "excerpt" of the audio at the point where I had been editing. I think, pressing Stop ought to clear the audio buffers but it does not at least some of the time. I wonder whether you are seeing a slightly different manifestation of the same problem.

Hi Jeff. I am running the latest version of VPX. This version of Windows came with my brand new laptop. I tried this afternoon to upgrade to the latest version of Windows. After initially telling me that my laptop was compatible, the installation assistant later changed its mind, so I am stuck with the old version. I have again changed the buffer settings, to no avail. Audio is outputting to the onboard Realtek speakers. I do own an external soundcard... worth a try?

I am not running VPX but MEP Premium. I get a similar delay when pressing play when editing 4K video but nothing plays before the clip gets pre-rendered and shown loading in the blue bar at the base of MEP. So the video playback is held until sound and video can play together.

I too am using the Realtek sound chip. You could try my sound settings as a starting point to see if things improve.

The settings may need to be larger than you would think but try to keep the amount of buffers as low as you can get away with.Enlarge the Preview and Multitrack sizes first. It can be a bit of a balancing act.

It also helps on complex parts to use the lightning symbol to pre-render some of the problem areas to get smoother playback.