I just installed independence and its free library, however it won't load the free content. When I want to load, say, "Mexican AC Bass" - I get a dialogue box saying "Could not find the file: YT Mex AcBass Long mic XA1 Y02 in image file: Independence Free Content 02". The dialogue actually lets me point directly to the content file, which I do, but then I get another message saying "Cannot load file(s)!"

What am I doing wrong?

Assuming you also have Music Maker installed, are you opening Independence as a plug-in from Music Maker?

Which variant of Music Maker are you using - Free, Plus or Premium and its version number as found under Help About?

If it is Music Maker 2021, see this bug list. Your issue is most likely related to item 3 which gives the same message.

John, thank you for chiming in.

Nope, my DAW is Cubase 10, and the behaviour is the same with both standalone instance and VST plug-in.

I also updated my signature, if that's of any help.

Do you get this problem with every instrument in Independence? Maybe a repair reinstallation will help.

The dialog with "Could not find the file" also shows up if Independence is not able to decrypt the files. This happens when the registering process was not correctly finished.

Yes, every instrument in the free content package. I also have re-installed Independence several times but nothing changes.

Sorry for being a dummy, but what do you mean by "registering process?" There is no registering required at any step throughout the installation?

. . . . This happens when the registering process was not correctly finished. . . .

I presume @SP. means this dialog that pops up, on first use, when you try to load an Independence instrument

which leads to this 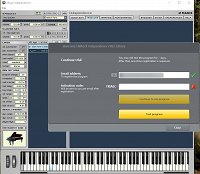 Thank you very much @browj2, however that doesn't seem to help in my case (video below).
@johnebaker - weirdly enough I have never seen such dialogs. Is there a way to bring them up at will?

This would clarify what my trouble is:

What do you make of that?

I'm just trying it now on a clean system without any prior Magix installation. When i tried to load the first instrument of Independence Free the grey registration box appears and and is asking for my mail. Then I'm redirected to Magix Website to login with my user account. After that I got an e-mail with a TRAILC-serial number. After I entered the serial number I was able to load every instrument without problems. That means that Independence thinks that the instruments on your computer are not registered.

Now the question is, how to force the registry dialog to open? Something went wrong here on your computer.

Did you already try to uninstall and reinstall the library?

Did you already try to uninstall and reinstall the library?

Thanks SP, yes, done it with both Independence and the free library several times... only to meet the exact same result. My computer has a fresh Windows install, too, with no prior Magix whatsoever. I'm thinking maybe there's something that got messed up in the registry while the initial installation, that's restricting the new installations from working properly, however tweaking Windows isn't really my strong suit - is there a step-by-step instruction for deep cleaning my machine from everything Magix before a fresh re-install?

And there must be a way to force the registration dialog to open? No? Mods, pretty please..??

I think you need to remember that the Mods are all fellow-users, just like you! None of us is a Magix employee.

However, to answer your question about how to completely remove everything "Magix", I have two suggestions:

So, try using Revo first (just follow all the instructions it gives you) and then reinstall Independence. Only if that still fails to give you the registration screen should you then consider using the M$ tool.

Did you try reinstalling the library while your firewall is deactivated?Are you running Independence as Administrator? Maybe Windows is blocking the registration.

I think you need to remember that the Mods are all fellow-users, just like you! None of us is a Magix employee.

My apologies,I'm new tho the whole Magix realm... I'll keep that in mind!

I did all of that, except for the MS utlility, for which the link you provided is apparently outdated - I'm getting a 404 error when I'm trying to downoad it. However I don't think there's a need for it anyway, every other program installs and runs just fine.

Did you try reinstalling the library while your firewall is deactivated?Are you running Independence as Administrator? Maybe Windows is blocking the registration

Yes, did all of that, nothing changes.

Yup, the files are there - what to make of them?

Anyway, the only dialog I'm getting after all the trouble is this: 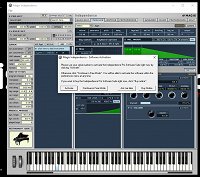 Clicking "Continue in free mode" lets me continue, but not use the free content. Clicking "Activate" just makes the dialog disappear, and that's it.

Thank you guys so much for trying to solve this issue, but as to Magix as the company behind the piece of s...oftware - what the heck..? I've been struggling with getting Independence working for about two months now. I started with contacting Magix support - I opened a ticket, which got no reply, and when I replied to the ticket confirmation email to find out what's the status with my case, I got an automated reply saying my ticket was friggen closed!! With no explanation nor any help.

The main reason behind wanting to try Independence was that I'm in progress of looking for a good bass instrument, and Independence seems to have a great sounding and extensive library (Acoustic & Electric Basses), for which I'd be happy to pay - however how the heck are Magix planning to attract paying customers with a complete and utter lack of interest in supporting their potential customers whatsoever.

Did you try it on another computer? That is one thing I would test in any case. Did you try to install Independence in another directory (not under Program Files but something less restricted by Windows like C:\Users\YourUserName\Independence) ?

Clicking on "Activate" should bring up the grey box where you enter your mail and serial number to activate Independence Pro. So there must be something blocking it. One last idea is to register on the Samplitude forum https://community.samplitude.com/ It has an own independence subforum and there the user called Kraznet (most likely THE samplitude expert on the web) may be able to help you.

Did you try it on another computer? That is one thing I would test in any case. Did you try to install Independence in another directory (not under Program Files but something less restricted by Windows like C:\Users\YourUserName\Independence) ?

Did both on my laptop - exactly the same problems over there, too.

Clicking on "Activate" should bring up the grey box where you enter your mail and serial number to activate Independence Pro.

Nope, it does not on neither of my computers...

One last idea is to register on the Samplitude forum https://community.samplitude.com/ It has an own independence subforum and there the user called Kraznet (most likely THE samplitude expert on the web) may be able to help you.

Will do! Thank you so much, SP!

So it is one month later and I maybe have an idea what is going on. I looked at your post in the Samplitude forum and saw that you are using the Independence_Pro_Standard_3_6_190115_16-15.exe for installing Independence.

Which installer did you use in your video recording? It looks like you recorded it with version 3.3 (and 3.6 in the Samplitude forum). But you should have used 3.5.

So it could be some version conflict that you are not using the correct version for the free library which could cause that no window displays to enter your serial.

Yes, you're right, I tried "Independence_Pro_Standard_3_6_190115_16-15.exe" that I found on a Samplitude forum after I had tried virtually everything I could with the previous version - only to find that it did not change anything for me.

As to the previous version - now that's interesting. In fact, I did use "independence_softwaresuite_32_dlm.exe" along with "independence_freelibrary_dlm.exe", both of which I downloaded right from the dedicated magix page.

I have to say, giving the discussed problems I gave up on Independence, or on Magix in particular - their utter lack of interest in support is beyond belief (opened a ticket twice, they closed both my tickets with no explanation or any feedback - what kind of a friggen company does that these days???), so I uninstalled the bloody piece of s...oftware. Anyway, after reading your comment I thought I'd give them another chance and downloaded the aforementioned .exe's (to be clear, "independence_softwaresuite_32_dlm.exe" and "independence_freelibrary_dlm.exe" again to avoid a possible human error that might have occurred the last time.

Install dialog claimed it to be version 3.5:

Then I ran the freshly downloaded "independence_freelibrary_dlm.exe", I let it download everything again and installed successfully.

Ran Independence and what do you know - its "about" information claims it to be version 3.3:

Honestly, what the..? I guess that's what happened the last time, as you sharply pointed out. And I guess I don't even have to mention that the free library still doesn't work!

However does the free library now work? OF COURSE NOT!!

I have a good reason to believe that I can't be the only one that downloaded the official installers from Magix website only to lose tens of hours trying to solve this friggen weirdness - to no avail.

Thanks for the information that it didn't work. I think that version 3.6 wouldn't work because I suspect it's some kind of Samplitude version of Independence and not a stand alone version. I Installed the 3.5 version. You are right, it says 3.3 in the splash screen but 3.5.0.286 in the preferences. That indicates that you were probably using the correct version from the start.

But I still don't get why it doesn't show the registering screen in your case. This bothers me to no end. Maybe one day somebody will find out.