Hi everybody, I recall a ad I seen for Music Maker 2023 I was unsure of it so I did no clicking of any links I was skeptical of the ad, does anybody know of a new version?

@David-Barselow Yes, I already have it installed. You can update for free and transfer all your paid features to the new version. Just the new paid features like Beatbox Pro 2 and modernEQ are missing. But if you don't care for them, then you don't need to buy them.

Ha ! this is a bit of a funny incident I checked the store and it shows the new version but when I check the update option under the help menu drop down list it tells me there is no update.

@David-Barselow You need to download and install the free edition of version 2023 from Magix.com

You don't need to pay again for the features you already paid for.

Thanks for the help though!

. . . . asking me to download a free version when I paid for a premium version I don't understand that anyhow thanks for the information . . . .

I believe you are missing a point that has so often been repeated in the forum and has been commented on in 2 of your previous posts - there is only one version of Music Maker, the free version, what you purchase are editions which add extra features etc to the free version.

When you install the free version and the login to your account, the program then gets upgraded to the edition you have, ie Premium, and its features, what you do not get is the new features or functions that are part of purchasing the new version.

I told you to watch the tutorial - right to the end. If you did, which I hightly doubt, then you didn't understand the main points. Watch it again - to the end!

Did try 2023, and it's same as 2022, slow as snails having dance party in tar pit. I was wishing that they would manage slowness issues even partially.

i.e. click something in UI, and take coffee break waiting UI to slowly (hopefully) eventually to recognize action and do something. Not talking minor slowdowns, but seconds sometimes, and UI is constantly lagging, even if running in rather fast i7 desktop

- it seems that new ASIO driver is fixing some problems of old one. With old driver, all other software (like youtube in web browser) were blocked when music maker was playing something. Now with quick test did not hit problem immediately (with old version it was immediate problem).

Is the tardiness immediate on starting a new project, after working for a while or when you have a high number of tracks or effects in use?

What is the computer specification and Windows version, see this topic for what is required and please quote processor and graphics card make/model in full.

I would suggest you put this information in your profile signature so we do not have to keep asking for it.

The amount of free space on the hard drive(s) you have.

Curious new behaviour; if task manager is already running and starting MM2023 then process becomes invisible in task manager after startup (visible briefly during starting), naturally constaly visible via procexp or via restarting task manager. I wonder if that is odd attempt to fix (aka. "just hide it and nobody notices...) the fact that MM constantly uses CPU while idling.

Q: any idea what is behind that behaviour?

Let us fix the first problem before deviating off on a tangent with a different issue which may actually be a symptom of the first issue please.

In order to help you we need the information requested above - also include which Antivirus program you have installed.

Weird, some slowness disappeared, when I started doing that cpu monitoring above (and noticed odditity with it...). I wonder what is going on, since I didn't touch anything. This is anyhow with my faster desktop setup (did not dare to try laptop setup yet).

But at point of time when I wrote original post, simple things, like "open menu from menubar", took upto 10 sec, same with "active midi keyboard tab", could take upto 10 sec... Well, now measuring still "slow" behaviour, i.e. seconds, but not that silly slow "10 seconds" (still so slow that, for example, can see how menubar menu's slowly render themselves to become visible).

I did try, however, in between
- resetting store
- resetting audio store
- doing re-login after reset store; well this caused some problem, since MM2023 just kept crashing, and eventually it ended up showing dialog that it could not access directory "C:\Users\xxx\Documents\MAGIX\Music Maker" (also some strange error in german also appeared, complaining something about backup or something (not german speaker, and forgot to take screen capture of it). Curiously there was directory "C:\Users\xxx\Documents\MAGIX projects", with "Music Maker" under it (and windows was insisting that dir to be somehow equivalent to "MAGIX" dir when I trying to manually create one, odd). Well, renamed that dir to be then "MAGIX", and it seemed to allow doing re-login then.

Hmm... strange slowness coming back, MM2023 running now few tens of minutes, while I've slowly scripted this message down, and it's starting to become very slow. Memory usage has kept increasing based into procexp (but since timeframe is too short can't state about memory leaks based on that).

While MM is "freezing", CPU usage is rather low (and for MM itself upto 10%, in total might be that single cpu core's worth of time peeks up for a moment, but not seemingly constantly), and GPU is also pretty much idle.

it ended up showing dialog that it could not access directory "C:\Users\xxx\Documents\MAGIX\Music Maker"

Sounds like some protected folder issue possibly with security software or Windows. It really would be useful if you answered the question about spec and antivirus/firewall programs.

No AV/FW except builtin windows ones

I surely would like to know what is that constant idle read IO what MM2023 is doing. I.e. while is app is just idling, not doing anything it seems to be doing lot of IO (for other apps delta goes somewhere around max 200KB occasionally, but MM happily churns constant 2MB). Thus I would suspect some IO blocking happening sometimes. 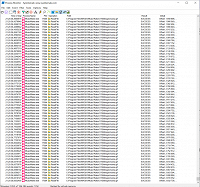 well, thus I just *had* to replace it with 1x1 pixel static gif and see what happens... well, after that hack MM is not leader of IO top any longer, but did not help with strange slowness (while there, did same hack for busyIndicator.gif in addition to muma.gif)

No AV/FW except builtin windows ones

So make sure that protected folders is turned off such as C:\Users\Public\Documents which Magix uses. I turn if off entirely.

I think I've had that always turned off since such tend to cause conflicts with SW development.

And while there added now also file/dir exclusions for MAGIX SW and VstPlugins from scanning, in case it matters (didn't really notice any difference)

With "MAGIX" dir I suspect some localization problem was going on, i.e. I noticed that in program settings side directory was referred as "MAGIX" (not only in music maker") but in file system, "MAGIX projektit" (aka, "MAGIX projects" in finnish) was shown. Not sure exactly what was going on, but might be some "smoke'n'mirrors" logic not working. I.e. I saw similar directory naming issue in another computer also.

. . . . I noticed that in program settings side directory was referred as "MAGIX" (not only in music maker") but in file system, "MAGIX projektit" (aka, "MAGIX projects" in finnish) was shown. . . .

There is no 'smoke and mirrors' here, this is a common occurrence - the 'Magix projects' folder name is the 'display' or 'user friendly' name for the 'MAGIX' folder as shown below

:) imho, it's "smoke'n'mirrors" always when system tries to hide actual name, since illusion tends to break at some corners always. Anyhow, it seemed to somehow cause problem (i.e. I also had "MAGIX Downloads" and "MAGIX verkkolataukset" dirs); if keeping "friendly" name same as "actual" name fixes that part of the overall problem it's fine for me.