Hello, My Dear Community Music Friends, I hope all is well as you digest a story of events not told enough. This is not Facebook. I have no use for the platform. I will try not to go into (boring) details as I give an account of how it went for Kathy and I.

My dear sister Veronica submitted my name to a popular New York newspaper in response to a request to "Write a Soldier in Viet Nam". (March 1966) The 'sugar report' (mail) I received was a bit overwhelming as I was always moving on a mission and choppers would drop off mail and supplies as we moved and my 50 to 1 letters weighed me down. Letters from School Kids of different grades, to women of all kinds, in support of me being where I am. My day or two back at base camp was spent trying to write back. Coming home was an adventure making Eye to Eye contact with quite a few of my 'pen pals'., and so after a phone call with Kathy, I went to meet her and take her on a date..I still had about 10 months left with the Screaming Eagles, so I proudly wore my Paratrooper uniform. She was really cute in person (what is another word for "hot"). Her family was nice to meet and so as we were leaving on our 'first date' her farther, Mr. Scaduto, better known as Tony or worst yet 'Sonny' from Mulberry St. (where Kathy was born) got close with the eyes, and asked me if I knew how old Kathy was? (I did not, It never came up) I turned to break eye contact to gaze at Kathy, rolling her eyes, from feet to face and guessed, "18,19". with confidence. He turned and walked away saying " she is 16, I want her home by 11," OK, that happened, nobody told me he was in the Normandy D-Day Invasion and sustained leg and head injuries, and did not like German boys, maybe especially 'horny' boys in uniform. (Who me??) Moving on.

And so, I took her Horseback riding and as I dismounted for a rest along a wooded trail, she would not remove herself from the saddle. We were alone and my intentions were honorable, honest. OK, that happened too. With the "idea wheels" spinning around in my head and making small talk I drove to the local airport with my shiny new/used 1965 Mustang 289ci V8 3 speed standard trans. and asked if she would like to take a plane ride. (Is the Pope Catholic?) We hopped on to a Piper Tri Pacer that was made of Wood and Canvas that the pilot told us at about 1500ft. Just my luck I had no parachutes for me and my Lady Fair lol.

The full-scale aircraft of the Piper Tri Pacer next to my model was though the kindness of the pilot to allow the photo back in 1999 Maine. That one is also built of wood and canvas. (except for the engine) 😄😌.

So, good Chris - you know and so on, but ... damn it went well and "she" is still there LOL Nice piece of music you made for your story.

Thank you, my friend,

Thank you so much for your touching remarks, Paulo. You are my music friend indeed.

The best of everything for you.

that´s a beautiful song with a beautiful romantic touch... really enjoyed listening... singing is good and fits in well... best of all the drums towards the end of the song...wow... a very well done job... a heart for you.

Hello Chris,
beautiful song with great vocals.
Best wishes and good health to you and your family ...
Jochen…

Thank you All for your generous comments, I hope the over lays are not too creepy/weird for you but. I thought them to be cool

Your story about Kathy and you is really very exciting, funny and interesting. Well worded and written Chris 🙂👍

Hi Chris, a really nice story and I wish you both all the happiness in the world 🍀🍀🍀.

Lyrics and music is very sublime I am often in America.Also watched The Vietnam Traveling Memorial Wall. 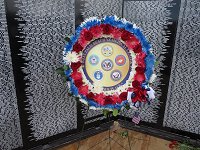 All the best, Hildegard

Thank you for the photo. I have seen that T wall when it came to my hometown on Long Island and went to Wash. to see the real one. I have found many names I knew. Take care my friend.

that´s a beautiful song with a beautiful romantic touch... really enjoyed listening... singing is good and fits in well... best of all the drums towards the end of the song...wow... a very well done job... a heart for you.

You are so kind Bert. Thank you for your thoughtful comment, A wonderful closing with a chuckle.

Back at cha', my friend.

Hello Chris,
beautiful song with great vocals.
Best wishes and good health to you and your family ...
Jochen…

Your comments are always welcome here, thank you for your well wishes

Thank you, Sandro, your comments are always welcome here.

Hi Chris, a really nice story and I wish you both all the happiness in the world 🍀🍀🍀.

Thank you, Siggi, for such a thoughtful comment. And you are a beautiful person

Liked it a lot to listen to.

Liked it a lot to listen to.

Thank you, Pic, you put it real nice!