This tutorial describes how to fix various issues which may arise after upgrading your computer to Windows 10.

It is recommended you print out the PDF file before attemting the procedure. 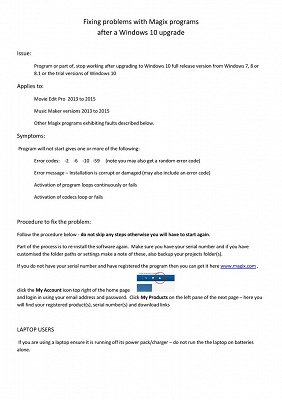 Thank you so much! Very good explanation.

Very well written. Even if it were just supplied for convenience, (no indication out that) it would have been a gesture worthy of thanks. Thanks, it's people like you that make the world go round. -M

This was going to be my next question? I am due to upgrade to windows 10. Thanks

It looks not so simple.

Giving this reply an excellent rating. Since updating to Windows 10 I've suffered all kinds of bugs with Photo Story 2014, particularly MPEG activation insisting it be re-done every time I attempt to export, then it failing with no explanation, and Blu-ray writing hanging at the start of the second cut, which I suspect is linked to the codec activation.


Ran through the 'fix' procedure last night and the Blu-ray issue has cleared. When I get time I shall attempt an MPEG4 export, but so far, so good.

I had problems with MEP 17 not recognizing my dvd burner and some other minor issues.  Following the instructions suggested in this PDFworked perfectly.

I thought I commented here a couple of months ago, but seems I didn't. I wanted to add that after I upgraded Windows 7 in-place to Windows 10, I had big problems with VPX. So I uninstalled and reinstalled with the same issues. i followed the above PDF and it seemed to almost work, as symptoms were different. I uninstalled again, followed the PDF again, then manually searched for 'MAGIX', 'Video Pro', and anything else I could think of. I ended up finding more files left behind after the uninstall. Deleting them and then reinstalling worked for me.

I apologize for not writing this sooner as I can no longer remember where those other files were located.